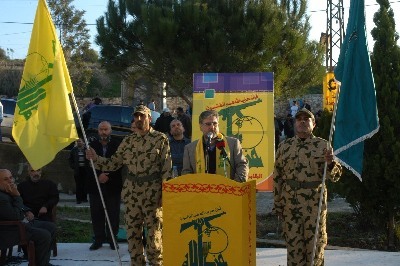 Loyalty to the Resistance bloc MP Nawaf Moussawi noted on Monday that the division in Lebanon lies between those seeking to defend their country and liberate it from Israeli aggression and those allowing the United States to employ the indictment for its own interests.

He stressed: “The Special Tribunal for Lebanon is only aimed at protecting Israel’s security through targeting the Resistance.”

“There used to be a time when some sides in Lebanon were banking on an Israeli assault to rid the country of Hizbullah, but the Resistance’s increased power and the important strategic change in the region that started with the fall of the Egyptian regime” have thwarted their goals, he added.

“They no longer have a choice but to protect Israel through the STL,” the MP pointed out.

Moussawi stated: “We have made great sacrifices for this country’s freedom and people and we won’t accept that an international mandate be imposed on it once again under the excuse of the STL.”

In addition, he criticized STL prosecutor Daniel Bellemare’s various requests from some Lebanese ministries, calling them an “insult to the state, people, and Lebanese officials.”

Indirectly addressing calls by the March 14 camp for Hizbullah to lay down its arms, he said: “Those issuing such demands are aware that fulfilling even one part of this dream is close to impossible because they are not seeking to achieve it but to once again create sectarian division.”