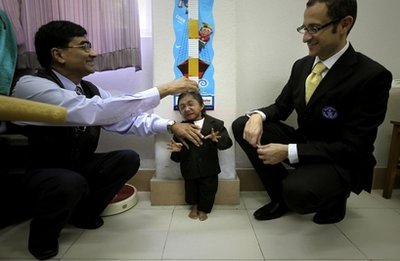 A Nepalese fruit seller's son with the body of a toddler turned 18 on Thursday and was officially declared the world's shortest man by Guinness record officials.

Cheers went up when Magar was handed a world record certificate by Guinness official Marco Frigatti. The ceremony was held in a hotel in Pokhara, Magar's hometown and a popular tourist destination west of Katmandu.

"I can confirm that as of today Khagendra Thapa Magar is officially the shortest man in the world," Frigatti announced as he handed over the certificate.

Magar's family has campaigned for years to get him the crown, but earlier requests to Guinness were rejected because of the possibility he might grow.

"We had to wait till he was 18 and became an adult," Frigatti said.

"We are very proud of our son," said his father, Rup Bahadur Thapa Magar.

"We have been finally recognized and our dreams have finally come true."

On Thursday, Magar and his family excitedly welcomed journalists to their home, where Magar jumped on the kitchen table and made tea for the visitors and family members. He also received presents for his 18th birthday and danced to the sound of a toy drum.

Magar, who weighs 6.5 kilograms, was tiny even at birth, weighing just 600 grams. His father says he has no explanation for why he never grew taller — his younger brother is a normal height for a boy of 13.

Local doctors are stumped, but lack facilities for detailed testing.

Magar's doctor for the past five years says he has the body of a 3-year-old.

"His body structure is like that of a small child and he also thinks and behaves in that manner," Hum Prasad Newpane said.

Magar — who already travels as part of a dancing troupe when he isn't helping his parents in their fruit shop — seems ready for the media spotlight that will accompany his new title.

Next year he is to serve as a government-appointed goodwill ambassador as his nation celebrates Visit Nepal Year.