Asir Agrees to End Sit-in after Reaching Agreement with Charbel 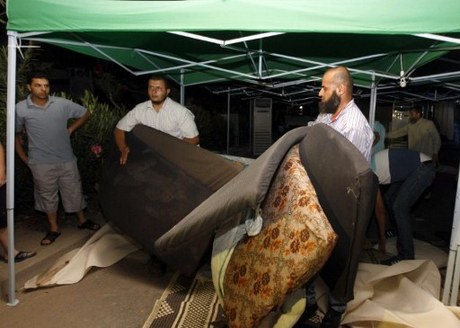 Salafist cleric Sheikh Ahmed al-Asir, the imam of Sidon’s Bilal bin Rabah Mosque, on Wednesday agreed to end a sit-in protesting Hizbullah’s arms that lasted for more than a month after reaching an agreement with Interior Minister Marwan Charbel.

“Reopening the road in Sidon is a gift on the occasion of Army Day,” Charbel said at the site of the sit-in in Sidon.

“I came here after three days of negotiations with one of Sidon’s figures who coordinated with Sheikh Ahmed al-Asir and we reached this final result,” Charbel added.

“Prime Minister Najib Miqati and I have sensed total seriousness from all the members of the national dialogue committee regarding the discussion of the defense strategy,” Charbel said.

LBCI television said “a serious pledge was given to Sheikh al-Asir on discussing the issue of arms in national dialogue; guaranteeing the safety of any peaceful protest he might organize in the future; taking security measures around the Bilal bin Rabah Mosque; settling the issue of Islamist detainees; and vowing not to arrest any person arbitrarily without a legal basis.”

Charbel stressed that “the judiciary has the final say on whether or not to release any detainee.”

“Sheikh Ahmed has started to dismantle the sit-in’s installations and everything will end by morning,” the minister added.

He stressed that “no one can impose their will on the state, which is the protector of everyone,” thanking “all the Lebanese and Palestinian mediators who contributed to ending this sit-in.”

For his part, Asir extended gratitude to “President Michel Suleiman, PM Miqati, minister Charbel, some Palestinian forces and everyone who contributed to resolving the issue and fulfilling the main demand which is exerting serious efforts to address the issue of weapons through a defense strategy around the dialogue table.”

“Minister Charbel and PM Miqati promised that all the other demands will be met,” Asir added, urging “all those concerned, especially those who possess arms, to be serious so that we don’t resort to a second, third or tenth sit-in.”

“I tell everyone, especially Hizbullah Secretary-General Sheikh Hassan Nasrallah and Speaker Nabih Berri, that we want to live together as equal citizens, and the most important thing is the absence of arms outside state control,” Asir added.

Asir had instructed his supporters to launch celebratory fireworks and dismantle the sit-in’s tents. He personally removed the first tent to the sound of applause and Islamic hymns.

Asir and his supporters began their sit-in 35 days ago to demand that Hizbullah disarm. Many of Sidon’s political figures and business owners slammed the sit-in, describing it as a threat to the southern city’s security and economy.

Baklawa for everyone. Maybe maamoul el asir is better.

from the beginning , asir was a reaction not an action.

This so called "salafi wahabi" guy turned out to be more civilized then FPMers.... No tires burned, No journalist harassed, and a small mouth to end with....

Glad it is all over now .