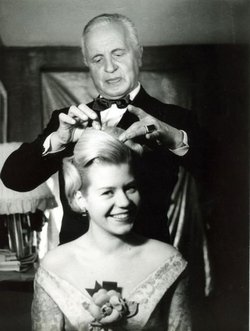 Antoine of Paris, the world's first celebrity hairdresser who revolutionized the look of women in the early 20th century with a boyish bob, was in fact a Pole.

Antoni Cierplikowski was better known as "Monsieur Antoine" in his adopted city where he created the cut made famous by Coco Chanel and other fashion icons of the times.

Ironically, this pioneer in an industry today worth an annual 50 billion dollars worldwide has been largely forgotten.

But his legacy is slowly being revived in his beloved 1884 birthplace, the sleepy central Polish town of Sieradz, thanks to a hairdresser's competition held each summer.

He was nothing short of a "revolutionary", said his onetime apprentice Janusz Szymanski, now in his sixites, at the Openhair event dedicated to Monsieur Antoine.

"He's bar none the greatest figure in hairdressing in the 20th century."

The Polish stylist not only championed the daring short bob, his innovations included what have become salon basics. Among these are shampooing a customer's hair, using hair spray, which he concocted with spirits and gum arabic, and coloring hair with non-organic dyes -- including the blue rinse for grey hair favored by grannies.

Antoni was only 17 when he arrived in the French capital but within a decade was the talk of the town.

Around 1910, 40-year-old French star Eve Levalliere was cast in the role of an 18-year-old and turned to Antoine for a make-over. His inspiration came when a little girl with short hair and bangs skipped into the salon to deliver mail.

"That's how the unprecedented 'a la garcons' (boyish) or 'shingle bob' cut was born -- it became an instant hit and a sign of the times," said Szymanski.

The style still resonates, worn at one point or another by modern-day celebrities from Victoria Beckham, Rihanna, Katie Holmes, Cameron Diaz or Renee Zellweger to supermodel Naomi Campbell.

Szymanski called Antoni an ace judge of character who could size up a woman's age, personality, needs and woes. "The psychological aspect is absolutely crucial in the hair business, and he knew it," he said.

Among those Antoni charmed was Coco Chanel, whose Rue Cambon atelier in the heart of Paris was a stone's throw from the Pole's salon.

"She created modern couture, and he modern coiffure," said Szymanski.

In the roaring 20s, his short, chic cut was all the rage with the libertine Flappers who traded Victorian corsets and conventions for Chanel's short skirts and free-spirited smoking, drinking, driving, dancing and dating whom they pleased.

In 1925, Antoine opened a U.S. salon in New York's Saks Fifth Avenue department store, the first of a chain that would grow to 110 shops across the country.

At its peak, his hair empire stretched from Paris to Melbourne, Tokyo and Vancouver and as his fortune grew, so did his eccentricity.

Obsessed with his own mortality, he slept in a crystal coffin, wore glass slippers he made himself, dressed as royalty, played cathedral organs at home, designed extravagant period costumes, sculpted, recited poetry and strolled through Paris with his dog dyed mauve.

By the mid-1960's, however, Antoni started sinking into obscurity. He had left his business-savvy wife, and his apprentices like the now legendary Alexandre de Paris had set up shops of their own.

"Emperor Antoine" returned to then-communist Poland to a simple life in Sieradz where he grew vegetables and chopped wood, but still dressed up as something of a royal for visitors.

He died in 1976 age 92 of pancreatic cancer, but in 1992 Alexandre de Paris sent envoys to Sieradz to have his body exhumed and the right hand cut off and brought back to France, where it was interred in Paris' Passy cemetery.

"I symbolically chose his right hand as it had styled Coco Chanel, Sarah Bernhardt and even Queen Marie of Romania," Alexandre de Paris, who died in 2008, told Agence France Presse at the time.

At this year's Openhair, young Polish talents yearning to be the next Antoine snip away to the music of Edith Piaf's classic "Je ne regrette rien" (No Regrets).

"Of course stylists these days have their own ideas, but to be honest, after Antoine it's been difficult to think up something really new."