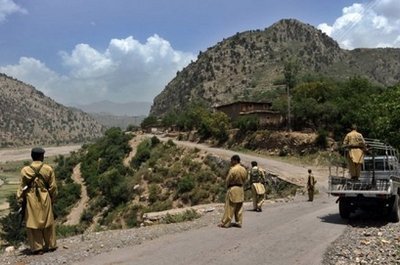 A bomb attack killed six Pakistani soldiers in one of the most lawless parts of the country's northwestern tribal belt on Friday, security officials said, the third deadly attack this week.

The spate of killings of paramilitary troops in the tribal belt follows a relative lull in violence as the military and government focused on relief efforts for 20 million people hit by catastrophic floods.

Washington has branded the tribal belt a global headquarters of Al-Qaeda and wants Pakistan to do more to fight insurgents streaming across its border into Afghanistan, pressing its ally on the issue during talks this week.

The device exploded as the convoy was moving through the Yakh Kandaw area of Orakzai, one of the districts where Taliban militants have fled after punishing offensives elsewhere in the northwest.

"Six security officials died on the spot while three were injured. A search operation has been launched in the area to trace the militants."

A paramilitary official from the Frontier Corps said the dead included a colonel, and said two other troops were wounded.

A senior security official told AFP the convoy had been en route from the village of Ghaljo in Orakzai to the northwestern garrison town of Kohat.

Pakistan flatly denies US suggestions it is not doing enough to tackle Taliban and Al-Qaeda-linked militants who have carved out strongholds in the northwest and last year inched closer towards the capital Islamabad.

According to Pakistani military statistics, 2,421 army and paramilitary soldiers were killed and 7,195 wounded in fighting with Islamist militants from 2002 until April this year.

Similar bomb attacks killed three Pakistani soldiers in the tribal district of Khyber on Wednesday and another three in South Waziristan on Tuesday.

The United States is planning a public show of support for Pakistan on Friday, including potential new military aid -- a key issue for the powerful army -- as it tries to strike a balance with its growing ties to India.

Secretary of State Hillary Clinton will lead a third and final day of a "strategic dialogue" with Pakistan, an initiative by President Barack Obama's administration to demonstrate long-term assistance.

Pakistan has won US praise after it mounted offensives against homegrown Taliban extremists last year.

But a White House report to Congress earlier this month stated bluntly that Pakistan has not confronted Afghanistan's Taliban, in what experts see as a bid by Islamabad to preserve influence on its northwestern neighbor.

Pakistani officials have been angered by reports of mounting US pressure on the military to launch an offensive against militants fighting against American troops in Afghanistan but who are based in North Waziristan.(AFP)