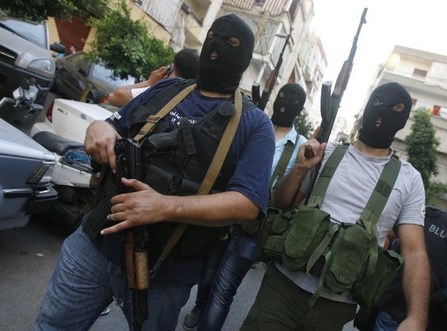 Al-Meqdad clan are set to stage a “peaceful” open-ended strike to protest the arrest of several members of the family over a kidnapping spree across the country, An Nahar newspaper reported on Thursday.

The daily reported that the clan members received a text message on their cell phone calling for an “open-ended sit-in as their (arrested) family members are not terrorists.”

The sit-in will be held in Beirut's southern suburbs and the town of Maqneh in Baalbek that coincides with the return of President Michel Suleiman, who is heading the Arab delegation to the South American-Arab countries summit in Peru, to Lebanon next week.

In September, the army arrested several al-Meqdad family members, including the clan's spokesman Maher, during raids on Beirut's southern suburbs and other areas.

The raids came after the clan went on an abduction spree of Syrians and Turkish nationals to avenge the kidnapping of family member Hassan al-Meqdad in Damascus in August.

Sources close to the clan told the daily that the army warned that it will not tolerate any road closure “even if those who staged the endeavor are women and children.”

Sources wondered about the “ambiguous” stance by Hizbullah, pointing out that it is divided over the matter as some say that the party should not provide some members of the clan with political cover, while others reject making the clan pay the “price” of the political differences.

The detained family members are charged with forming an armed group to carry out terrorist activities, kidnapping and terrorizing people with the force of arms, responding violently to security forces and the ownership of unlicensed weapons and explosives.

As long as it is PEACEFUL it is ok.

You pull one gun or close one road then all of you SOB's must get locked up...

more dilemnas fr hizbushaitan who is starting to loose a lot of its popularity.
after the latest revelations, let us see what is going to happen to the lebanese abducted in syria.

What authorities. It's a mascarade kell wa7ad adram men el tani. The gang who go around kidnapping people by their nationality, or those who pose as legal authorities and throw people in prison without any warrant and let them rot for years without a lawsuit.
Pick which one you prefer. I'd rather not have any of both.

Open-ended Strike? So until further notice no more kidnappings, drug dealing, weapon smuggling, mugging, robbing, road closing, tire burning, Hashish growing, land occupying etc. I sure hope this open ended strike doesn't last very long or else how is the bee2at al hadinbat infested with Zionist spies and Iranian terrorists is going to survive, it's not like anyone in it have real jobs.