A to Z of Britain's Royal Wedding 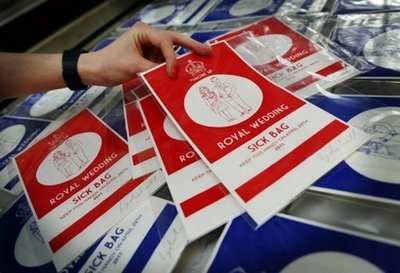 The royal wedding between Prince William and Kate Middleton on April 29, from A to Z:

A FOR ABBEY: William and Kate will marry in Westminster Abbey, a London church steeped in royal history.

The funeral of Princess Diana, William's mother, took place there in 1997, and the first king William was crowned in the abbey in 1066 after the Norman conquest of England.

B FOR BEST MAN: William's brother Prince Harry will be his best man, while Kate's sister Pippa will be her maid of honor.

Harry, dubbed the "Party Prince" by the British press, has promised some cracking tales in his best man's speech -- but nothing too colorful in front of his grandmother Queen Elizabeth II.

C FOR CARRIAGE: Kate Middleton will travel to the wedding in a Rolls Royce limousine that was damaged when student protesters attacked Prince Charles and his wife Camilla in December.

Royal watchers may be hoping for rain at the wedding and the appearance of the famed horse-drawn Glass Coach used by William's mother Diana at her wedding in 1981, which will only be used in the event of wet weather.

D FOR DIANA: The spirit of Diana, who died in a car crash in Paris in 1997, will hang over the wedding, which is taking place 30 years since her own marriage to Charles in 1981.

E FOR EATING: The menu for the wedding lunch is a closely guarded secret, but one thing is assured: it will be "so British".

F FOR FERGIE: The black sheep of the royal family, William's aunt Sarah Ferguson has not been invited to the wedding after a series of tabloid revelations.

G FOR GIFTS: No food mixers or bath towels on this wedding list: the royal couple have named 26 charitable organizations to which they want their guests to donate. Queen Elizabeth II received more than 2,500 presents at her wedding.

H FOR HONEYMOON: Kenya? Mauritius? Speculation is rife about where the newlyweds will spend their honeymoon before starting married life in a cottage in Wales.

I FOR "I DO": It will be the most hotly anticipated "I do" of the year, witnessed by a global TV audience of some two billion plus huge crowds in London and media from around the world.

J FOR JUBILEE: Addicts of royal pageantry need not despair after the wedding, for Queen Elizabeth II will celebrate her diamond jubilee in June next year.

K FOR KATE: But not for long. After the wedding she will be officially known as Catherine.

L FOR LOVE: The couple fell in love while studying at St Andrews University in Scotland.

M FOR MIDDLETONS: Kate Middleton's background is not nearly as blue-blooded as her future husband's. Her parents, Michael and Carole, met while working as airline staff in the 1970s but made a fortune by starting a children's party-ware business, called Party Pieces, in 1987.

N FOR NIGHT: While most of the 1,900 guests will go home after the ceremony, a select group of 300 will head to Buckingham Palace for dinner and dancing late into the night hosted by Prince Charles.

O FOR ORCHESTRA: William is a Royal Air Force search and rescue helicopter pilot and an RAF fanfare will lead the musical entertainment at the wedding. Musicians from the Household Cavalry, a chamber orchestra and two choirs will also be involved.

P FOR PUBS: The traditional pubs beloved of Britons will be open several hours later on the wedding day, allowing revelers to down a few more pints of "Kiss Me Kate", a beer especially invented by one brewery for the occasion.

Q FOR QUEEN: Queen Elizabeth II will hope the marriage of her grandson to Kate will turn the page on the royals' turbulent recent past, from the divorce of Charles and Camilla to Fergie's embarrassing escapades.

R FOR REPUBLICANS: Anti-monarchists from across Europe are flocking to London for the wedding to try to boost their republican cause.

S FOR SCOTLAND YARD: London's police will lay on a massive security operation in a bid to prevent trouble at the wedding, following riots in London at the end of March on the sidelines of a huge rally against government cuts.

T FOR TRAIN: Kate's wedding dress will most likely have a train trailing behind it. But like all the details about the garment, it will be top secret until the wedding day.

U FOR UNIFORM: William may don his RAF helicopter pilot's uniform when he weds Kate.

V FOR VOMIT: British artist Lydia Leith has produced souvenir sick bags for those who find the hype around the wedding too much to stomach.

W FOR WILLIAMS: Archbishop of Canterbury Rowan Williams, the head of the Church of England and leader of the world's Anglicans, will marry the couple.

X FOR EXES: William and Kate have reportedly, and bravely, invited several of their old flames. William is said to have asked former girlfriends Rose Farquhar and Jecca Craig, while Kate has invited Rupert Finch.

Y FOR YOUTUBE: The video sharing website will offer live streaming of the wedding. The royal couple also used microblogging site Twitter to announce their engagement in November -- alongside an old-fashioned press release.