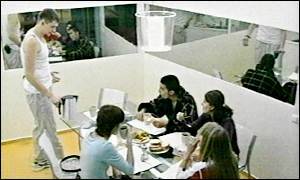 A disgruntled fan Monday emerged as the prime suspect behind a mystery explosion at the Russian equivalent of "Big Brother", which claims to be the world's longest-running television reality show.

The blast early Sunday morning rocked the grounds where "Dom-2" (House-2) is filmed, wounding a security guard. Police later uncovered another more powerful device on the premises which was then made safe.

The TNT channel show -- broadcast without a break since 2004 -- has won huge popularity in Russia as well as controversy with the contestants not shying away from explicit discussions or activities on camera.

A security source told the RIA Novosti news agency that the suspect was a 39-year-old from southern Siberia "who had previously tried to become a contestant in the show but without success".

The popular daily Komomolskaya Pravda said the suspect, whom it named as Sergei Lyapin, had on several occasions last winter tried to access the compound to take part in the filming.

The daily Moskovsky Komsomolets meanwhile said he may have also developed an obsessive fascination for one of the star contestants on the show, Vlad Kadoni.

Dom-2 has developed into a marathon project with peculiarly Russian features quite distinct from its western European equivalents.

Twenty hopefuls are in the house at any one time. If a majority of them decide to throw one out, the contestant exits, to be replaced by a new hopeful.

However some contestants have been there for more than three years, making them massive stars.

The hopefuls are encouraged to form couples and also work on building the house, which the eventual winners of the show will receive as a prize.

However such is the program's popularity, the channel has never set a date when it will end and the house will be given away.