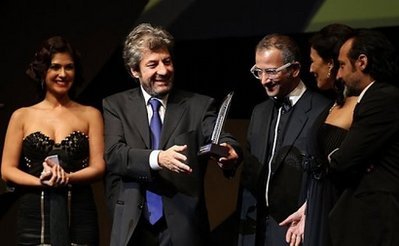 Lebanese film "Here Comes the Rain" (Shatti Ya Dini) that tells the story of missing persons from the country's civil war won a Black Pearl award at the Abu Dhabi Film Festival on Friday.

"I dedicate my film to all those who are in love with freedom and peace in Lebanon," said director Bahij Hojeij, after his film won the 100,000 dollar prize in the Best Narrative Film from the Arab World category.

Russian film "Silent Souls" (Ovsyanki), directed by Aleksei Fedorchenko, meanwhile won a Black Pearl in the Best Narrative Film category "for its poetic depiction" and the "excellence of its cinematic language."

The oil-rich Gulf emirate's festival, which ended on Friday, is the most richly endowed among its regional rivals, with Black Pearl awards for each category worth nearly one million dollars (724,000 euros) altogether.