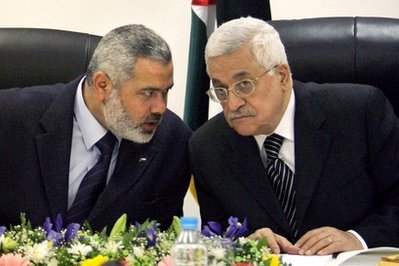 It will be the first time the two men have met since Hamas took over the Gaza Strip in June 2007, forcibly ousting Fatah from the coastal territory after days of bloody street battles.

"The signing of the agreement will be on May 4, when Abbas and Meshaal and all the Palestinian factions will meet at the Arab League headquarters in Cairo," said Azzam al-Ahmed, who headed the Fatah delegation in talks between the two rivals, which on Wednesday resulted in a surprise reconciliation deal.

Abbas last meet with the exiled Hamas chief, who is based in Damascus, at the end of April 2007, just six weeks before the bloody confrontation which dramatically worsened the bitter split between the two movements.

Wednesday's long-awaited reconciliation agreement saw the secular Fatah party which dominates the West Bank-based Palestinian Authority and Gaza's Islamist rulers agree to form a transitional government ahead of elections to take place within the next year.

The announcement sparked a firestorm of criticism from Israel, which said it would damage chances for peace, but Abbas said the interim government would not dictate policy when it came to negotiations with Israel, which would remain the mandate of the Palestine Liberation Organization that he heads.

Tensions between Fatah and Hamas date back to the start of limited Palestinian self-rule in the early 1990s. They worsened dramatically in 2007 when Hamas forces ousted Fatah from the Gaza Strip after a week of deadly clashes, cleaving the Palestinian territories into hostile rival camps.