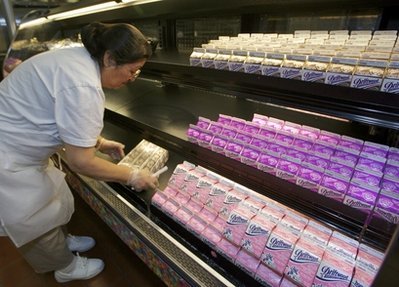 Chocolate milk has long been seen as the spoonful of sugar that makes the medicine go down, but the nation's childhood obesity epidemic has a growing number of people wondering whether that's wise.

With schools under increasing pressure to offer healthier food, the staple on children's cafeteria trays has come under attack over the very ingredient that made it so popular — sugar.

Los Angeles Unified, the nation's second-largest school district, is the latest district to tackle the issue. Superintendent John Deasy recently announced he would push this summer to remove chocolate and strawberry milk from school menus.

But nutritionists — and parents — are split over whether bans make sense, especially when about 70 percent of milk consumed in schools is flavored, mostly chocolate, according to the industry-backed Milk Processors Education Program.

A joint statement from those groups points to studies that show kids who drink fat-free, flavored milk meet more of their nutrient needs and are not heavier than non-milk drinkers.

"Chocolate milk has been unfairly pegged as one of the causes of obesity," said Julie Buric, vice president of marketing for the Milk Processors Education Program.

"Chocolate milk is soda in drag," said Ann Cooper, director of nutrition services for the Boulder Valley School District in Louisville, Colo., which has banned flavored milk. "It works as a treat in homes, but it doesn't belong in schools."

Flavored milk is also a target of British TV chef Jamie Oliver, who has made revamping school food a signature cause.

For a segment to be aired on his "Food Revolution" TV show, he recently filled a school bus with white sand to represent the amount of sugar Los Angeles Unified school children consume weekly in flavored milk.

"If you have flavored milk, that's candy," he told The Associated Press.

If the school board adopts the ban, Los Angeles Unified would join districts including Washington and Berkeley, Calif.

But efforts by some other districts turned sour after children drank less milk. Milk consumption drops by 35 percent when flavored milks are removed, according to the Milk Processors Education Program.

Cabell County, W.Va., schools brought chocolate milk back at the recommendation of state officials, and Fairfax County, Va., did the same after its dairy provider came up with a version sweetened with beet sugar rather than high-fructose corn syrup.

The Florida Board of Education also backed away from its proposed ban on chocolate milk after the state agricultural commissioner urged the board to look at all sugary food and beverages served in schools.

Cooper and others argued children will drink plain milk if that's what's offered.

"We've taught them to drink chocolate milk, so we can unteach them that," Cooper said. "Our kids line up for milk."

Boulder Valley hasn't been barraged with complaints since removing chocolate milk two years ago, but it hasn't tracked whether milk consumption has dropped, she said.

Parents line up on both sides of the issue.

Deborah Bellholt, a South Los Angeles mother, said none of her six children ranging from pre-school to high school age will drink plain milk. "By allowing kids flavored milk, they still get the calcium they need," she said. "If not, they'd bypass it."

But Mimi Bonetti, a suburban Los Angeles mother with two elementary school-age children who drink plain milk, said she gets angry that chocolate milk is portrayed as nutritious. Children can get calcium and other nutrients from other foods, she said.

"If you offer them the choice of chocolate or plain, of course they're going to choose chocolate," Bonetti said. "When you're telling kids that drinking chocolate milk is a healthy choice, it's sending the wrong message."

Ask kids, and most vote for chocolate. Suburban Los Angeles seventh-grader Nacole Johnson said plain milk tastes yucky. If there were no chocolate milk, "I wouldn't drink it," she said.