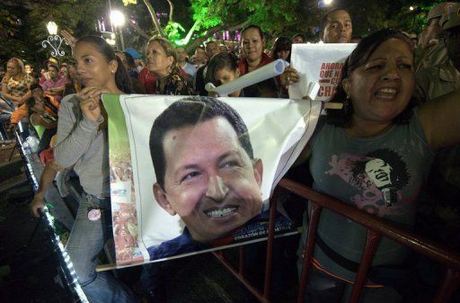 During his treatment, 58-year-old Chavez had suffered "bleeding that required the adoption of corrective measures," Communications Minister Ernesto Villegas said in a television and radio address.

It was the first time Venezuelan officials had acknowledged complications in the six hours of surgery that Chavez underwent on Tuesday in Havana.

Chavez is undergoing "a progressive and favorable recovery," Villegas told the nation, warning that this "requires a precautionary time" due to "the complexity of the operation and also because of complications that arose."

Vice President Nicolas Maduro, the former foreign minister to whom Chavez bequeathed the reins of power before flying to Havana on Monday, also said that the president's condition was improving.

"In the last hours the process of recovery has evolved from stable to favorable," Maduro said, describing it as one of "progressive recovery."

Chavez aides have warned Venezuelans to be prepared for the worst as the country, already deeply divided over the firebrand leader's populist Bolivarian revolution, heads into a period of uncertainty.

Diosdado Cabello, a senior leader of Chavez's party, urged the armed forces to stay united and be wary of any attempt to destabilize the country. He said Chavez himself had warned against dissent before flying to Cuba.

The latest turn in the 18-month-old saga comes less than a month before Chavez was scheduled to be sworn in on January 10 to another six year term, and three days before regional elections seen as a key test of political strength.

Before departing for Cuba on Sunday, Chavez left Maduro in charge, for the first time naming him as his successor in the event he can no longer govern.

Venezuela's constitution calls for new presidential elections to be held within 30 days if the president is incapacitated, either before he can be sworn in or during his first four years in power.

Constitutional experts say the presidential inauguration cannot be postponed in case of illness, and that Chavez must be in the country when he takes the oath office.

Procedural succession issues aside, there was the broader question of the political void Chavez would leave if he dies or must step aside.

Chavez has reserved for himself every major decision since taking office in 1999, dominating a highly personalized movement that left few other leaders of his stature.

Until last week, when he stunned the nation with news that his cancer had returned, Chavez appears to have banked on making a full recovery, despite debilitating rounds of radiation treatment and chemotherapy since he was first diagnosed in June 2011.

Chavez claimed a year later that he was cancer free before embarking on his successful but arduous reelection campaign.

A somber tone has descended on the country since Chavez's latest medical stay in Cuba.

His supporters held religious services and candlelight vigils across the country, praying for their leader to overcome the disease.

On Wednesday cabinet members, staff, honor guard and members of the Venezuelan military went to a special Catholic mass at the Miraflores government palace to pray for the president's health.

The state governor whom Chavez defeated in the October presidential election, Henrique Capriles, accused the government of using the president's illness to get out the vote in Sunday's regional elections.

"What does what is happening to the president have to do with the election?" said Capriles, who is running for reelection as governor of Miranda state, where Caracas is located.

Indeed, Maduro on Tuesday likened a vote for pro-Chavez candidates to "a hug, a kiss, a vote of love for Chavez."

Chavez supporters are expected to win in most of Venezuela's 23 states.

Messages of support for Chavez also poured in from leftist Latin American leaders.

"For Chavez, our brother in the struggle, we reiterate all our affection and solidarity and wish that... he emerges stronger," Cuban President Raul Castro said in his first comments since Chavez landed in Cuba for surgery.

The communist regime in Havana depends heavily on support from oil-rich Venezuela.