Gadhafi Envoys Due in Moscow Tuesday 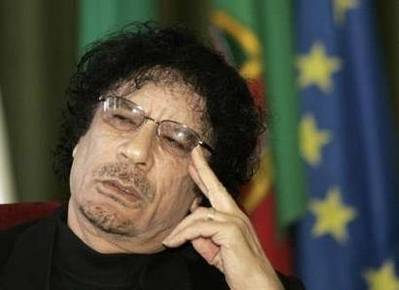 Russia was due Tuesday to hold previously unannounced talks with envoys of Libyan leader Moammar Gadhafi amid efforts by Moscow to help mediate an end to an international campaign it has opposed.

Foreign Minister Sergei Lavrov said the meetings with the Tripoli government representatives will be followed by talks with rebel envoys from Benghazi at a later date.

"We have agreed Moscow meetings with representatives of both Tripoli and Benghazi," the ITAR-TASS news agency quoted Lavrov as saying.

He added that the trip by the rebel representatives had been delayed for "technical" reasons but had originally been scheduled for Wednesday.

Lavrov did not specify which officials would be coming to Moscow or whom besides himself they would meet.

Senior Libyan rebel leader Mahmoud Jibril held talks in Washington on Friday and met French President Nicolas Sarkozy in Paris on the following day in his bid to gain international recognition for the opposition government.

Russia has refused to accept the rebels as a legitimate power in Libya and still has formal ties with the Gadhafi regime.

Lavrov has fired almost daily barbs at the international military campaign against Gadhafi's forces and accused the foreign powers of trying to target the disputed Libyan leader.

Russia abstained for the U.N. Security Council vote on international military intervention in a move that helped the measure to pass.

But Moscow has argued that the current campaign breaches the U.N. mandate and has also criticized the leading role taken in the crisis by the International Contact Group.

It was particularly furious when the group this month agreed to provide financial assistance to the rebels from funds that partly came from Gadhafi's frozen foreign assets.

At the same time, Russia has also joined world powers in imposing its own financial and military export sanctions on Tripoli and has been openly critical of Gadhafi's crackdown on the opposition.

The Kremlin's top foreign policy adviser said shortly after the international campaign started that Moscow was keeping its ties open with Tripoli only "because we have to".

But while calling on Gadhafi to immediately cease fire and enter talks, Russia has also criticized some Western nations for agreeing to start training the rebels, saying the decision breached international law.