Arslan Supports Jumblat's Initiative: There Can Be No Substitute to Dialogue 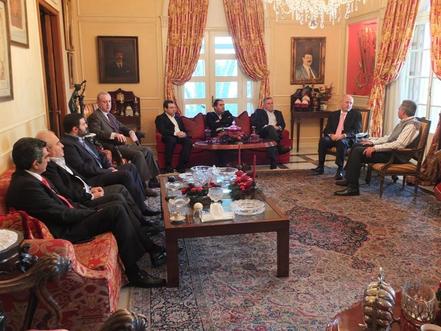 He said: “The balanced and national position expressed by Jumblat is aimed at breaking the deadlock between the Lebanese factions through dialogue as there can be no substitute to the all-party talks.”

The MP made his remarks after holding talks with a PSP delegation headed by Transportation and Public Works Minister Ghazi al-Aridi.

“We support Jumblat's initiative because we are in great need of such proposals during these critical regional and international circumstances and their impact on Lebanon,” continued Arslan.

He hoped that all sides “would learn from past experiences and end the mentality of seeking regional or international capitals” to find solutions for local problems.

For his part, Aridi noted that the PSP and Arslan may differ on various issues, but they agree on national matters.

Asked if Jumblat's initiative may have been a failure, the minister replied: “Should we instead leave the country victim to its deep divisions and await internal strife?”

The initiative concerns all powers, he stressed.

Jumblat is seeking to convince political foes to attend a new round of national dialogue under President Michel Suleiman as an icebreaker by launching the initiative to steer the country away from “the ghost of strife.”

The next dialogue session is set for January 7.

It is a step in the right direction, hopefully his next will be to condemn the Syrian regime and their agents in Leb

Hasn't being a Syrian crony always been a substitute to dialogue? Being a Syrian crony eliminated the opponent (instead of the hard path of dialogue) and resulted in gaining by bullets what could not be attained by ballots. So M8 should stick to what worked best for them ......... I forgot, sorry dialogue was only the sheep cloth worn by the wolf.