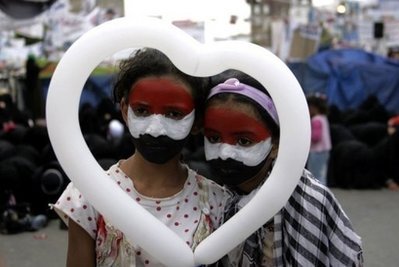 A Gulf-sponsored accord to end a bloody political dispute between President Ali Abdullah Saleh and Yemen's opposition will be signed on Sunday, opposition and ruling party officials said.

"The signing will take place on Sunday in Sanaa," Sultan al-Barakani, the assistant secretary general of the ruling General People's Congress, said of an accord sponsored by the six-member Gulf Cooperation Council (GCC).

"We have called the GCC secretary general and informed him that all the parties have agreed to sign, and have invited him to come to Sanaa," he added.

An opposition official who spoke on condition of anonymity also said that "the signing will take place on Sunday."

GCC Secretary General Abdul Latif al-Zayani flew out of Sanaa on Wednesday after sources close to the negotiations between the regime and opposition said the two sides again failed to ink a power-transfer accord.

According to the Gulf-brokered proposal as it was previously outlined, Saleh would quit office within 30 days in return for immunity from prosecution, before a government of national unity is formed and elections for a new president held after two months.

Yemeni political sources said that Saleh's change of heart over the accord followed intense pressure from Washington and various European capitals.

U.S. President Barack Obama said in a speech on Thursday that Saleh "needs to follow through on his commitment to transfer power."

Deadly protests calling for the departure of Saleh, who has been in power since 1978, have gripped the country since January.