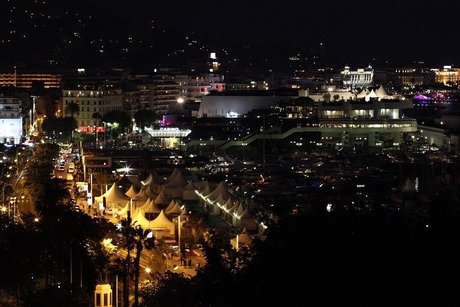 The blood and teargas of Arab revolts filled the screen at Cannes on Wednesday, as the controversial film "18 Days" premiered during a day honoring Egypt and its revolution.

The film, consisting of 10 shorts by different directors, covers the popular revolt that began on January 25 and led up to the fall of president Hosni Mubarak's regime after more than 30 years in power but left around 1,000 dead.

Some of the directors and actors involved in the shorts compilation were accused of having worked for the Mubarak regime, prompting an online petition and some to boycott the screening and the day honoring Egypt.

The films, mostly fictional and shot after the revolution but drawing on television archives and even mobile telephone footage, deal with the lives of ordinary Egyptians who are drawn into the popular uprising.

A girl from a poor neighborhood comes to downtown Cairo to sell aniseed drinks in "Creature of God."

Police beat her after she picks up the slogans calling for Mubarak to stand down, and as she succumbs she wonders whether she will die a martyr for Egypt or go to hell for having dyed her hair.

In "19-19", a regional manager for Intel is in the hands of the feared state security. As an alleged organizer of the revolution, he is tortured to death. His last words as recorded by his torturer are a repeated call for freedom.

Profits from the film will go towards political and public education programs in rural Egypt.

Egypt "has informed the world of its need to change the course of history and of its need for freedom, while demonstrating its collective strength and expressing its desire for democracy," festival organizers said.