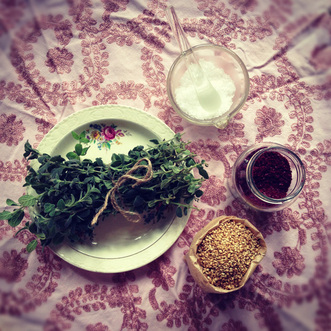 Jordanian “Smisim&Sumac” has been selected as one of the semi-finalist teams for this year’s MIT Enterprise Forum Pan Arab Region Start-Up Competition for the Ideas Track.

“Smisim&Sumac” is on a mission to discover, preserve and promote Arabic culinary traditions by turning local food producers into international suppliers. We recently interviewed Sara Dajani the mind behind the project to know more about her idea and how she aims at empowering Jordanian thyme and olive oil producers.

“We met for the first time in the San Francisco Bay area in 2010, during the Arab Spring. Sarah Toukan was studying engineering and I was working as a consultant for a high tech Silicon Valley firm. Our first discussion was at a cafe where we bonded over our shared passion for the history and culture of the Middle East and our ambitions to become entrepreneurs. We made a promise to one another that we would one day work together. A few months later our paths diverged-- Sarah Toukan went off to pursue a design and engineering degree in Paris and I began discovering the culinary and agricultural heritage of Jordan. We kept in touch and, after a series of serendipitous events, found an opportunity which we could pursue together: Simsim & Sumac. Merging my research on Middle Eastern cuisine and Sarah Toukan’s creative and technical expertise, our project is an expression of the beauty and richness of our region's culture.” Says Sara Dajani

The team’s idea is to launch a company that sources local thyme and olive oil and packages them together as a specialty Middle Eastern food product. The packages are then distributed to premium food retailers and grocery stores in select Arab countries, the U.K. and U.S. The product which comes in the form of a box includes a pocket of thyme (zaatar) and a bottle of premium olive oil with a label that shares the rich history of the products.

Simsim&Sumac’s products will be sold as premium goods to a yet untapped market which will empower local producers and provide them with a guaranteed market for their products which would otherwise go to waste. The company aims at sustaining local producers not only financially but also through partnership and training agreements to further improve their production and marketing skills.

“We are purveyors of high quality, regionally-based food presented through art, design and a story. For us, Jordan is a country of hidden potential. In Ajloun, rolling verdant hills of centuries-old olive groves tell a story of pastoral idealism. In Jerash, where dairy is king, visitors carry loaves of bread in search of labneh rolled in dried herbs, or surrounded by a pool of olive oil. Every element of Jordan's landscape forms part of a tapestry of Middle Eastern culinary tradition. We see ourselves as a continuation of that tradition, re-discovering the region's hidden treasures and the magic which encapsulates them, and sharing them with our customers. “Says Sara Dajani

“We believe in passion above all else. Entrepreneurship is scary business, riddled with obstacles. Everything can be overcome in due course, but you need to be ridiculously passionate to get through it all. Our involvement in this competition stems from a desire to bolster that passion with the community and resources of the MIT Arab Start-up Competition, and we hope to emerge from this experience as role models for a new generation of Arab youth, especially young women, with passions and ambitions of their own.” Says Sara Dajani.

Simsim&Sumac will attend a two day workshop in Qatar in April 25 along with 49 other teams, where they will receive coaching, training and network with other entrepreneurs from the Arab region and meet the region’s major players in the entrepreneurial ecosystem.