Anti-Orthodox Draft MPs Warn Against its Adoption for Shattering Lebanon 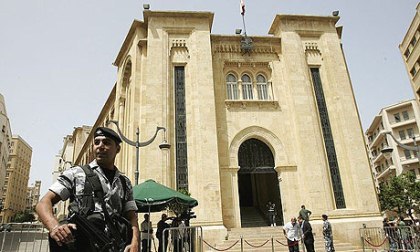 The members of the March 14 opposition alliance, who have severely criticized the so-called Orthodox Gathering draft-law, warned again on Wednesday that the country would be shattered if parliament gives it the green light.

In remarks to al-Liwaa daily, March 14 independent Christian MP Butros Harb said he sought to convince Speaker Nabih Berri during a meeting of the joint parliamentary committees to postpone the approval of the proposal's 2nd article.

But Berri insisted on putting it to vote.

The proposal, which calls for a single district and allows each sect to vote for its own MPs under a proportional representation system, was adopted by the joint committees on Tuesday despite the withdrawal of al-Mustaqbal, National Struggle Front and independent opposition Christian lawmakers from the session.

Harb reiterated that the Orthodox proposal is “unconstitutional, and it leads to extremism and shatters Lebanon.”

Another opposition lawmaker, MP Marwan Hamadeh, told An Nahar that MPs “did not resort to voting on Tuesday but to the postponement of the elections indefinitely.”

Interior Minister Marwan Charbel has warned that the elections that are set to be held in June would be postponed if parliament goes ahead with the adoption of the Orthodox proposal.

He said his ministry needs time to prepare for the polls.

Al-Mustaqbal bloc sources expressed more optimism however, saying the approval of the draft-law by the joint parliamentary committees “was not the end of the path.”

“There is still a possibility to find solutions as long as the proposal hasn't yet been adopted by the parliament,” they said.

Criticizing the Hizbullah-led March 8 majority coalition, the sources said that the party and its allies are giving the Lebanese people the option of a law that gives them the majority of seats in the legislature and postpone the polls.

Such a measure “would push the country to a battleground,” they warned.

Maybe he censored himself.