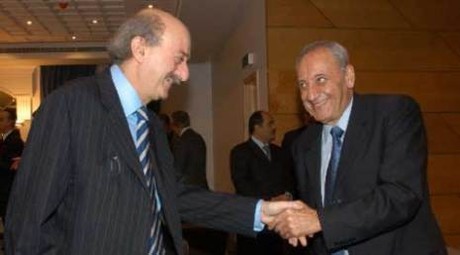 In an interview on Al-Jazeera, Jumblat also said “the Lebanese government has failed in implementing the self-dissociation policy, which prompted March 14 parties to fight on the side of the Syrian people."

Turning to the controversial issue of the new electoral law, Jumblat said he has information that “Speaker Nabih Berri will not allow the adoption of the Orthodox Gathering draft law (in parliament), because essential components of the Lebanese people are against it.”

“Berri is keen on accord in Lebanon,” Jumblat added.

Joumblat instead of attacking the orthodox law propose one law that give the Christians their constitutional Right, but u know very well that a fair law will reduce you to Ur right size

I think they just gave the finger to the christians. PSP, mustaqbal, now Berri are against it. To my knowledge they are unselfish, always looking for the christians' best interests.

the same finger he gave to 14, or another one?

Surprise surprise Mr Joumblatt. Tell this to the Talleyrand we have at the foreign affairs! Mansour who refuses to admit what Hizbollah themselves have declared and admitted! This is what is called being a doormat to the Hizb, or better a piece of toilet paper!

i see many Aoun and LF supporters holding a grudge against WJ from the civil war as if they were innocent victims while the opposite is certainly true in many cases. so it is time to let go of this mentality and get beyond it. No one is really interested in hearing about it and certainly no one wants to repeat -