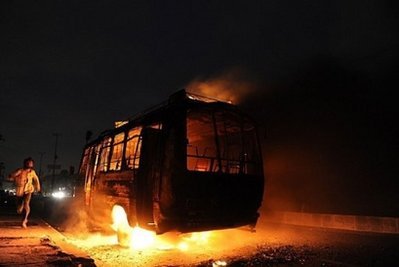 Outbreaks of violence in Pakistan's largest city of Karachi killed at least 31 people overnight following the murder of a lawmaker in a drive-by shooting, officials said.

Lawmaker Raza Haider from the Muttahida Qaumi Movement (MQM), a partner in the Sindh provincial ruling coalition led by the Pakistan Peoples Party, was shot dead by gunmen on motorcycles Monday.

His assassination sparked panic in the teeming city of 16 million where markets closed and streets emptied as bursts of gunfire were reported in various parts of the financial capital.

Vehicles, shops and petrol stations were set on fire during the violence.

The unrest comes with Pakistan already battling to contain unprecedented flooding that has killed up to 1,500 people and left 2.5 million affected, largely in the impoverished northwest.

"The city's hospitals received the bodies of at least 31 people who were victims of gunshots," said Hamid Parhiar, police surgeon of Sindh province.

"The bodies have been received from different parts of the city. All those were shot dead," Parhiar told AFP.

Only security officials would acknowledge a connection between the outbreaks of violence and the lawmaker's killing.

"Around 30 people have been killed in different incidents of gun attacks in different parts of the city, and they all seemed to be a sequel to the MP's murder," one such official told AFP.

Jameel Soomro, spokesman for the Sindh government, said Haider's killing was part of a broader "conspiracy" to destabilize Karachi which is Pakistan's "financial engine.”

After the MQM called for a city shutdown to protest against the lawmaker's killing, the government closed schools and colleges in Karachi and Hyderabad, about 174 kilometers (108 miles) to the east.

Reports from Hyderabad said vehicles and properties had also been set ablaze to protest against the MP's assassination.

Provincial authorities have already banned public political meetings in Karachi in an effort to control intermittent waves of political killings.

The government has not released exact figures, but security officials say more than 125 people have died in such violence since the beginning of this year.

Karachi has been largely spared the Taliban and al-Qaida-linked bomb attacks that have dogged northwest Pakistan, but is plagued by ethnic and sectarian killings, crime and kidnappings.(AFP)

plagued by ethnic and sectarian killings