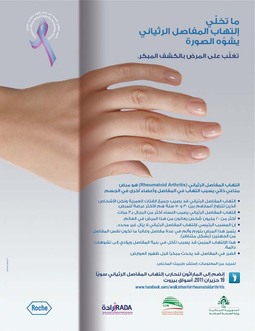 The ministry of health launched the first Rheumatoid Arthritis National campaign in Lebanon to educate people on the importance of early detection.

The campaign was launched on Wednesday in cooperation with the Lebanese Society of Rheumatology, the Association of Arthritis Patients in Lebanon ‘IRADA’ and Hoffmann-La Roche.

The campaign entitled “Don’t let Rheumatoid Arthritis Distort the Picture” runs through the month of June.

As part of the awareness campaign activities, a walkathon will be held in Beirut Souks on June 19 to fight against RA and reinforce the campaign’s core messages.