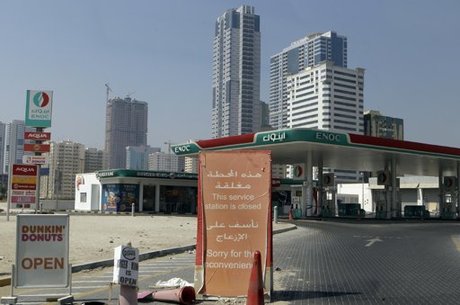 The trial of 94 UAE Islamist dissidents accused of plotting to seize power in the Gulf state resumed on Tuesday, as rights groups urged Britain to pressure the visiting Emirati president on their behalf.

Only 86 defendants, including 13 women, were present at the top state security court in the United Arab Emirates, WAM state news agency reported. The rest are being tried in absentia.

The women defendants have been on bail since the trial began on March 4.

The hearing was adjourned until Monday after the court panel heard defense testimony.

Foreign press and rights groups are not allowed access to the trial, but 143 relatives of the defendants, as well as 21 Emirati journalists and representatives of two local rights groups, were present.

Prosecutors say the accused, who were arrested between March and December 2012, are linked to the group Al-Islah, which has ties to the Muslim Brotherhood.

Attorney General Salem Kobaish said they would be tried for "having created and led a movement aimed at opposing the basic foundations on which the state's political system is built and at seizing power."

The trial reconvened as UAE President Sheikh Khalifa bin Zayed Al-Nahayan began a state visit to Britain, his first since he succeeded his late father as president of the federation of sheikhdoms in 2004.

Eight rights groups urged the British government last week to press the UAE during Sheikh Khalifa's visit on the "unfair trial" of dissidents.

"The UAE has become a country where people who speak their mind get locked up, and those who get locked up face torture" said Sarah Leah Whitson, HRW's Middle East director in a joint statement with other rights groups.

"Other human rights problems included reports of police and prison guard brutality," it said. "The government continued to interfere with citizens' privacy rights, and placed some limits on freedom of movement."

The UAE dismissed the report as "unbalanced," saying it ignored recent improvements, and insisted that it was committed to bettering its rights record.

The trial is the largest in the history of the UAE, which has not seen any of the widespread pro-reform protests that have swept other Arab states.

However, authorities have boosted a crackdown on dissent and calls for democratic reform.