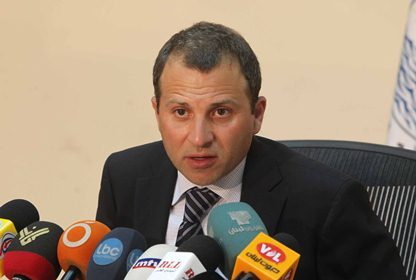 Speaking at the Arab Economic Forum, Bassil said scanning was now complete on 70 percent of the country's territorial waters -- an area of some 15,000 square kilometers (5,791 square miles).

Production from the reserves was linked to the speed of the exploration phases and installation of wells, but "theoretically ranges from three to seven years."

"If we meet all the deadlines, we hope to have completed the first exploration phase in the period between 2016 and 2017 and to begin thereafter development and production," he added.

The bidding round opened on May 2 and is scheduled to be completed by November 4.

The process has been complicated by Lebanon's fragile political climate, with a caretaker government currently in charge, as Prime Minister-designate Tammam Salam tries to form a consensus cabinet.

In January, Bassil said Lebanon hoped to have exploration contracts with international oil companies signed and sealed by the end of the year.

He has played down the risk of conflict with Israel over the potential reserves, despite a longstanding dispute over the maritime boundary between the two neighbors, which remain technically in a state of war.

But Lebanon has submitted to the United Nations a maritime map that conflicts significantly with one proposed by Israel, arguing that its map is in line with an armistice accord drawn up in 1949, an agreement not contested by Israel.

The disputed zone consists of about 854 square kilometers (330 square miles), and suspected energy reserves there could generate billions of dollars.

Lebanon has been slow to exploit its maritime resources compared with other eastern Mediterranean countries, with Israel, Cyprus and Turkey much further along in the process of drilling for oil and gas.

I hope Lebanese do not spend money they do not have. We will not see anything money for many years to come.

The government should have a website explaining how they intend to spend this money on the People, to improve their livelihoods, roads, economy, Solving the fact that Buildings in Beyrouth shoved into each other etc;

do not dream... they ll always come up with an excuse to justify why no money goes to the people... the nigerian style!