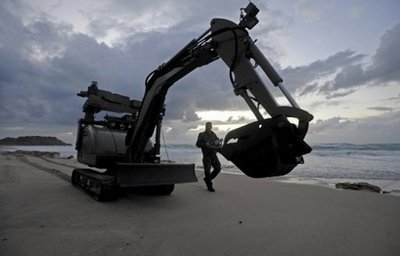 Israeli scientists have developed a powerful explosives sensor more sensitive than a sniffer dog's nose, which they say would have made it easier to detect cargo bombs like those sent last week.

The nanotechnology-based sensor is capable of detecting numerous types of explosives and can also be adapted to detect chemical and biological toxins, Tel Aviv University announced on Tuesday.

"The new sensor is highly portable and is more sensitive and reliable at detecting explosives than sniffer dogs," a statement said.

Researchers have teamed up with a commercial company and hope to have a working product on the market within "a year or two," Professor Fernando Patolsky, the head of the development team, told AFP.

"We have tremendous interest from the American military, the Israeli military and security companies," he said.

His team first published their findings in August in the German chemistry journal Angewandte Chemie.

Patolsky said the sensor is particularly effective at detecting explosives like those used in the parcel bombs sent from Yemen to the United States.

The two bombs contained 300 grams (11 ounces) and 400 grams of the high explosive pentaerythritol tetranitrate, or PETN, hidden inside toner cartridges.

"PETN is very powerful, but it is not at all volatile so it hardly releases any molecules into the air. So dogs have a very hard time finding it, especially if it is hidden inside something else," Patolsky said.

"Our experiments show that our prototype is sensitive enough to discover it," he said, adding that another advantage of their invention is that it does not need to be in physical contact to examine the suspect object.

The sensor employs arrays of silicon nanowires to form an electronic device that is highly sensitive to the surrounding electrical environment. These are then coated with compounds that bind to explosives.

To this they added 200 individual sensors to enable the detection of a variety of explosives and minimize the chances of a mistake, he said.

"There is a need for a small, inexpensive, handheld instrument capable of detecting explosives quickly, reliably and efficiently," he said.(AFP)