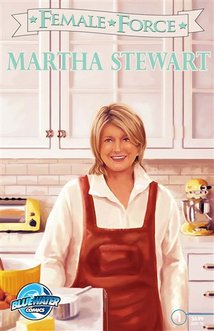 The woman who created her own media empire — television, magazines and more — is getting a biographical treatment in her own comic book next month.

"Female Force: Martha Stewart," a one-shot issue from Bluewater Productions Inc. to be sold in comic book shops, bookstores and online, will focus on how Stewart rose to become of the nation's best-known purveyors of home decor, cooking and confident but practical living.

It's the latest in a line of titles from the Vancouver, Wash.-based publisher, with previous subjects in the "Female Force" family of titles focusing on Hillary Rodham Clinton, Michelle Obama, Barbara Walters, Sarah Palin and Margaret Thatcher, among others.

Publisher Darren G. Davis said the comic, written by C.W. Cooke, will look at all sides of Stewart, including her rapport with fans as well as her conviction on insider trading.

"Our goal is to show the behind-the scenes machinations — many of them ignored by the mainstream media — that resulted in Martha Stewart becoming the phenomenon she is," he said.

A comic book, he said, was the perfect way to do that.

"A visual medium provides perspective that is not only accessible but more relatable to the average person without losing any of the information involved," Davis said.

Cooke said he wrote the issue because Stewart embodies the "American Dream" and "sounds like a superhero," too.

"I am writing Martha Stewart as both icon and from a perspective of someone who might see her as callous, calculating and scheming," he said.

Cooke notes that in addition to being a businesswoman, entrepreneur and famous brand name, Stewart has been a model and a small business owner.

"She's been to jail and she's come out unscathed," he said. "She sounds like a superhero, but really, Martha is an amazing human being and I hope readers love learning about her as much as I did."