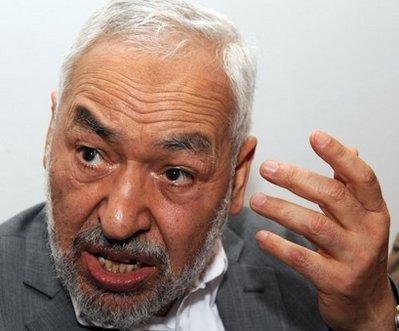 The commission "believes it has a popular legitimacy, when it hasn't," Ghannouchi told a press conference in Tunis, reproaching the panel for its "condescension."

The reform panel was set up in February after the popular uprising that ousted president Zine El Abidine Ben Ali on January 14, with a brief to pave the way for democratic change in the north African country.

"Who are you to want to decide the essential laws for the people?" the Islamist leader asked, charging that some commission members wanted to "promote their own aims" and that the panel was behaving like "a parliament."

Ennahda suspended its participation in the commission's work last week.

The Islamist movement, which was finally legalized at the start of early March after three decades as a banned opposition group, first pulled out of the reform panel at the end of May after a dispute over the date for elections, which had initially been set for July 24.

The reform panel, or "high instance for the achievement of the goals of the revolution, political reform and a democratic transition," is headed by Yadh Ben Achour, a jurist who played a major part in choosing its members, and has set far-reaching goals for the body.

Ghannouchi said the commission bore "the responsibility for the departure" of his movement, but he did not completely rule out the possibility of a return if the panel changed its outlook.

He said it was a "definitive withdrawal if the high instance continues to ignore the principle of a consensus. If reason prevails concerning a consensus we could study the option of returning."

Apart from a dispute over an eventual election date, Ennahda disagreed with the panel over the means of financing political parties. The rules that the commission wants to establish are contested by the large political movements that have substantial resources and do not want to see them cut, according to observers.

There is also a dispute over the inclusion in a "Republican Pact" that is intended to be the basis for a new Tunisian constitution of a clause banning any normalization of relations with Israel.

The leader of the Democratic Progressist Party (PDP), Ahmed Nejib Chebbi, which seeks to be an alternative to the Islamists, has also been critical of the reform panel, arguing that it is "not widely representative" because its members are not elected.

"The sooner it goes, the better it will be for the country," Chebbi said in an interview with Agence France Presse.

Ghannouchi returned to Tunisia on January 30 after nearly 20 years in exile, mostly in London, to be welcomed by thousands of people. He founded the movement in 1981 with intellectuals inspired by the influential Muslim Brotherhood born in Egypt.