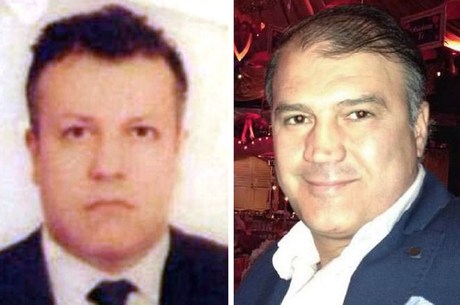 A Turkish pilot and copilot were kidnapped in Beirut early Friday by gunmen who intercepted their van as they were heading to a hotel in the Lebanese capital.

The kidnap is believed to be linked to the abduction of nine Lebanese pilgrims in Syria, whose families have urged Turkey to use its influence to secure their release.

The Turkish Ambassador, Inan Ozyildiz, told LBCI TV that he is following up the case, hoping that Lebanese authorities would work for their release.

Pilot Murat Akpinar and his co-pilot Murat Agca were on their way from Rafik Hariri International Airport to a hotel in Beirut's Ain Mreisseh seafront when they were kidnapped at the Cocodi bridge around 3:00 am.

The abductors were riding a four-wheeler and a Kia.

The van, which had six crew members on board, belongs to Turkish Airlines and its driver is a man from Zoaiter family who was taken for questioning by police.

In the wake of the incident, Lebanese soldiers deployed in the area, with two armored personnel carriers stationed by the roadside where the kidnapping took place.

Caretaker Interior Minister Marwan Charbel told Agence France Presse he had spoken with Turkey's ambassador and that an investigation was under way.

He also telephoned President Michel Suleiman to brief him about the probe.

On Friday afternoon, the state-run National News Agency revealed that a Turkish airplane landed at the Beirut airport and then flew around 122 passengers, among them the crew of the aircraft whose pilot and copilot were kidnapped back to Turkey.

Sheikh Abbas Zgheib, who has been tasked by the Higher Islamic Shiite Council to follow up the case of the abducted pilgrims in Syria, was quick to deny any involvement by their relatives in the kidnapping of the Turks.

But he said: “Had we known about it we would have encouraged it.”

Spokeswoman for the families of the pilgrims Hayat Awali also stressed that they had no link to Friday's incident.

The families have in the past months held several protests near the Turkish Embassy and Turkish Airlines headquarters in Beirut. They accuse Ankara of procrastinating in the negotiation with the rebels, who have kidnapped the pilgrims, to secure their release.

In May 2012, 11 pilgrims were kidnapped in Syria's northern Aleppo province as they were making their way back to Lebanon by land from pilgrimage in Iran.

Two of them have since been released, while the rest remain held in Aleppo's town of Aazaz.

We the Shia of Ali Ibn Talib will never give up on our pilgrims, Syria, and Palestine.

Ali ibn Abi Talib, r.a., is innocent of these thugs, the exact opposite of this terrorist lying, drugdealing scum...

LBCI: Gunmen have reportedly intercepted a bus and kidnapped several people on board at Cocodi bridge in Beirut.

Terrorists and a half...!

Terrorists living up to their names...

Goddamn Iranian puppets- they have taken us back centuries in time and we are so much less civilized than we were 20 years ago. I wish they would pack their bags and get the hell out and move to Qom in Iran where they can coexist with the odious Iranian Mullahs...

guess you have never been to Iran because they can teach Lebanese a lesson or two in how to be civilized.

"Sheikh Abbas Zgheib, who has been tasked by the Higher Islamic Shiite Council to follow up the case of abducted Lebanese pilgrims in Syria, was quick to deny any involvement by their relatives in the kidnapping of the Turks.

But he said: “Had we known about it we would have encouraged it.”

that says it all--scum is scum. when a so called religious leader encourages violence, it says a lot about the people he represents.

those are the people that iran defends with its arms and with its religion--they haven't spoken out once about the kidnappings and in fact, when they had the exchange for their prisoners a few months ago, these hostages were ignored. and don't forget about a member of hizb iran shooting a protesters in front of the iranian embassy--not a word from the embassy about the loss of life.

iran's current regime does not value life but rather its own push to restore the persian empire, no matter the cost--i met a lot of iranians in europe and the us whose families fled after the shah and in reality, they are not much different than us. the current crop is a different story however.

We've got whole bunch of Persians in the U.S., and, as to 85% of them, there is nothing civilized about them.

congrats geha, you really need to submit that comment for comment of the year award. you need to start preparing your speech from now.

yes. to hell with you racist maronites, partition please! back to your infested mountains. leave the south clean and green with OUT your racist ways and habits. It was probably YOU who kidnapped the pilots, I know how you bribe people, innocent chumps.

yes, that's right, join the lcftl (low cost flights to lebanon, who want to set up kleiat airport for easyjet, it would be useful for you)

They have every right!

samiam, what does that have to do with Iran. Furthermore, if you believe that that shias are uncivilized, violent power hungry people then what should be done about it.

First, i hope that MIT, turkish intelligence, will hit very hard Hizblat in retaliation, spetnaz way. Then, i hope as well that turkish, GCC and their friends will stop flying to beirut nasrallah airport, forbid their citizens to travel to lebanon, and remove their investment from this country. I am sure that the government will act against these thugs...

1- it's not benzona, u paranoiac.
2- Lebanon is not sure and friendly to turkey/gcc citizens, fair enough, they'd better leave it, take with them money/investments.
A turkish citizen was previously kidnapped by shia thugs.
Then when the economy will worsen, may be will our army/politicians understand that this game must end.
3- stop with that Israel/ us drone thing, u remind me of HA propaganda...

Only if they target your house first

Only if they target your house first

Great lebanon is getting better , guys take my advice ...leave this country ...immigrate and go to another civilized country....this country are meant to be for animals...

Terrorists! Hizbushaitan at it again. One of their so called terrorist franchises.

I still can't believe a religious leader would say they would support kidnappings. Does any body have any quotes "RECENTLY" from a "Lebanese" Priest or Bishop who supports kidnappings?

We can reverse the disunity by one act of decency which leads to more acts of decency.
Kidnapping is a lawless act no matter who commits it. Since it was committed most likely by HA or its proxies (I know there is no proof but at least it is high probability it is so), I was hoping M8 will condemn it and M14 will refrain from being insulting. Then in the future when roles are reversed, then M14 will condemn and M8 will refrain from being insulting. If we can do this few times rifts will heal and then we can all talk about building a nation free of all za3ran and militias (HA is included in my book as a sectarian militia with an Iranian agenda). But again lets agree that lawless acts must be condemned by all.

Minibash, you should write a book with all your self-conflicting ideas. Then, before publishing it and embarrassing yourself (if you care) re-read it while making corrections. At the end, you will find that nothing will be left of it other than the front cover with your name on it (Minibash, Sir) and the back cover with a price of USD 0.

zoiater family, who are they? (im from turkey and i want to know whats going on pls)

Shame on us Ekrem for doing this. -- The Zoaiter family is a mainstream pro-Hizbullah family.

dear lebanese people, no need to apologize, our governments have to apologize us. we are aware of everything going on.
this kidnapping means the lebanese group behind it accept turkish government is responsible and thats true.
unfortunately our government supports fsa and even el nusra of el kaide in syria. tayyip erdogan and his organisation desperately wants to take a part in middle east, he has a dream to be a sultan of neo-ottoman :)
no one cares him and this type of politics will sink us, about %60-70 of turkish people dont support this dream. he and his party are living last days of their rulership.
i cant be so angry with the group who made this kidnapping, they play the game by the rules, our government is in it and the game is dirty.

im sorry for our pilots, im sorry for you lebanese people and us turkish people too. and sorry for my english, we love you :)

I find it quite amusing that Turkey, is to blame for what happened to the pilgrims, and then they say about Turkey: “More than a year have passed on the kidnapping of the Lebanese and the Turks are manipulating the feelings of the Lebanese,” but come here ask the Lebanese what we really want, and its not to have the devil they have as their commander ruin our country, fight against its own, kidnap our freedom, and all of this in the name of what? Palestine? Iran? Syria? Next they are going to be fighting for the rights of the some small community of Peruvians in South America. They do the harm, and blame it on others, but let someone from another party (sunnis) say or do whatever and they all jump. . It´s so stupid, and so nerve wracking to see what a group of thugs can do to a country full of great people, educated, cultured and with so much potential. There´s an end to all of this, and hopefully it comes sooner than later. Obama we need your help.

On the kidnapping, can we be sure that HA has condoned it? Could it be what we are witnessing is some splinter group which is showing that HA is not 100% in control of the shiite community? Just wondering if that could be a plausible scenario?

Ok, now lets say we did an experiment right now: If a group kidnap Iranians in Lebanon now, who do you think the security apparatus would act first again....kidnappers of the Tyrkish or the Iranians...?