Hale, Aoun Agree that Baabda Declaration Acts as Basis for All Lebanese to Deal with Challenges 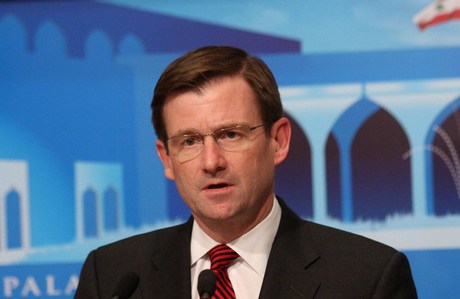 U.S. Ambassador to Lebanon David Hale stressed on Monday the importance of adhering to the Baabda Declaration that calls for Lebanon to distance itself from regional conflicts.

He said after holding talks with Free Patriotic Movement leader MP Michel Aoun: “We also discussed the Baabda Declaration, and agreed that it provides a foundation for all Lebanese to deal with the challenges that we face today.”

“I think it would be natural for me to say that our dialogue certainly revealed areas of common agreement, as well as areas where we may differ,” he added after the meeting.

“One important area of agreement today with Aoun was our shared emphasis on supporting Lebanon’s constitutional practices, institutions, and traditions,” he stated.

Hale remarked: “Certainly we in the United States believe that Lebanon will only achieve lasting stability with the full implementation of all outstanding U.N. Security resolutions and with all parties abiding by those provisions as well as those of the Baabda Declaration.”

“That is not the case today, but it can and must be in the future if the Lebanese are to achieve their goals of a normal, stable, secure, and prosperous country,” noted the ambassador.

“I am personally optimistic that the Lebanese have the resilience and capacity to fulfill that vision, and I look forward to continuing this dialogue with Aoun and others on these important issues,” he added.

Am I reading between the lines that they are preparing for a push to start implementing 1701 with aoun as a catalyst?

Aoun says amen to anyone and anything before backstabbing the people. The new American ambassador is wasting his time.

it is more the americans who are backstabbers.

How weird? I am an American and I don't recall backstabbing anyone. Wow!