Drogba to Face Fulham despite Malaria 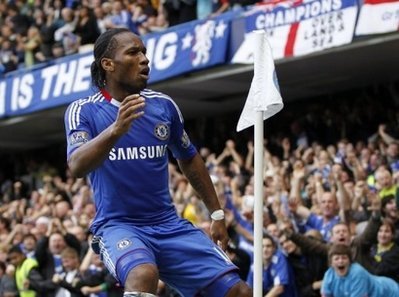 Chelsea manager Carlo Ancelotti insisted Didier Drogba would be fit to face Fulham in the west London derby at Stamford Bridge on Wednesday after revealing the Premier League leaders' star striker had been suffering from malaria.

The Ivory Coast international had been struggling with a previously unknown virus in recent weeks but blood tests have since confirmed it to be malaria.

Drogba was left out of the starting line-up in last weekend's 2-0 loss away to Liverpool at Anfield.

But he did come off the bench as a second-half substitute in a match that saw champions Chelsea's lead over second-placed Manchester United cut to two points.

"We found out last (Monday) night when blood tests showed he had malaria," Ancelotti told reporters at Chelsea's training ground on Tuesday.

"I don't know where he got it from," the Italian added.

"He had a problem. He has this virus and, obviously, he lost power and training," Ancelotti explained.

"He lost his condition. He's had treatment and now he's OK. He'll come back immediately in the best condition.

"He suffered, obviously, because he wasn't 100 percent but now, after treatment, he'll be better."