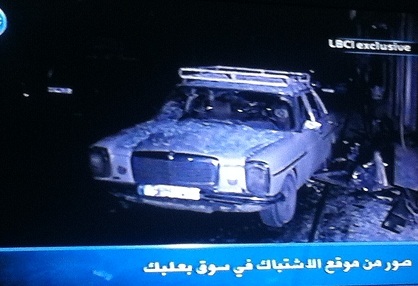 Five people were killed on Saturday after clashes broke out between Hizbullah members and al-Shiyyah clan in the Bekaa city of Baalbek.

“An exchange of fire occurred between armed men in al-Qalaa market in Baalbek, using light arms,” the army command said in a communique.

The statement added that three people were killed and other were injured in the clashes.

“An army unit swiftly deployed in the area and raided suspicious locations,” the army added.

Later on Saturday, the army issued another statement confirming that the troops continued their deployment in the Bekaa city, and have adopted intensified security measures to restore security and stability in Baalbek.

The communique revealed that a soldier was gravely injured while at his home in the city.

“Several fugitives were arrested in the raids staged by the troops,” the statement pointed out, warning that all gunmen and armed presence will be “strictly prosecuted.”

“The Army Command urges the residents of the city and its prominent figures to exercise self-restraint and cooperate with the measures adopted by the military institution to avoid an escalation.”

The state-run National News Agency reported that Ali Sami al-Masri, who was riding a motorcycle in the market, was killed in the clashes.

Several shops were set ablaze in the area.

LBCI television said that Hizbullah member Imad Ballouq was killed in the clash, while the National News Agency identified the other victims as Hisham Wehbe and Ali Mustapha al-Rifai, who is a vegetable vendor.

Later, the news agency reported that Mohammed Ali Soleh was killed by sniper gunfire in the renewal of clashes, bringing the death toll to five.

The unrest broke out when youths from the Shiyyah clan opened fire at Hizbullah members in the market, reported NNA.

The party members fired back, resulting in the ensuing clashes.

NNA said Saturday's attack was in retaliation to a shooting between the two sides in the Baalbek market on Wednesday.

The bloodshed is the worst sectarian violence to hit Baalbek, and it was the second clash in the city since Wednesday involving Hizbullah and Sunni gunmen.

It was not immediately clear what triggered the clashes on Wednesday and Saturday, but both happened at a checkpoint manned by Hizbullah.

Hizbullah members took to the streets of Baalbek after the clashes, an Agence France Presse correspondent said, adding that five Sunni-owned shops were torched by unknown arsonists.

Hizboullah has set up checkpoints in the Baalbek region after deadly bombings tore through its main southern Beirut stronghold in July and August.

Fifty people were wounded in the first attack and 27 killed in the second.

God Bless the martyrs of the Islamic Secular Resistance aka HA (Hussain Army) as they fall defending Lebanon's eastern, northern, and more importantly southern borders. This incident only highlights the sacrifices the resistance is incurring to defend us from the real enemies who hate our way of life. Those Shiyyah youths who fired at the warriors of the resistance committed an act of treason against God and Country. I wonder what they were up to and/or who paid them to instigate this uncalled for occurrence. May the Lord take the martyrs into his heavens and bless their innocent souls. I, Roaring-Flamethrower, urge the President to declare a week's mourning in honor of these heroes who fell in the line of their jihadist duty.

You sound like you're saying that when they get shot at they shouldn't defend themselves?

SHIA!!!
The mujahidin will kill you in 99999fh!!!
DWALAT al islam fi aliraq WAL sham
Is coming to make from you meet for YAHUD to eat!!!

We will bomb you in BAGHDAD and 200 FARSI SHIA will die!!!

That is what happens when tere is so much weapons outside the government and army. Period

Thanks for the interesting link from yesterday. Can we access everyone's ?

True that allnosra flags were raised in baalbeck ?

Why the anti-shia sectarian talk? Especially knowing they were the ones attacked in the first place

Excuse me? The article clearly states that the hezbollah men were attacked first and fired back.

Hizbullah is an Iranian militia, they make no secrete about it. Nasrallah takes orders only from the ayatollah and pledges allegiance to the Axis. The only thing they Resist is the formation of a real Lebanese government and LAF national authority.

Here is another reason why so many Lebanese are fed up and leaving on board of unsafe ships at the risk of losing their lives.

Amazing that Hezbollah has his army in a market in Baalbeck. Fighting Israel there?

Unite shia and sunni you are ALLmuslims. Put down your weapons and your hate

Hizb was defending or resisting Israel from Ba3albak? This will boil over and a week from now we will have another issue with Hizb and their peacefull gunment in Lebanon. As long as the government cannot control these clowns then history will continue to recycle itself. Oh yeah and death to Israel and all the infadels out there....

The resistance is burning the stores of Lebanese businesses. They truly are defending us from Israel now, if Lebanese are dead they can't be bothered by Israel anymore.

Southern: The primary reason why your comments are constantly targeted with responses disputing your position is because "you pick and chose, avoid or embrace facts that suits you to make your point." The SLA was a Shiite army deeply rooted in the South for the protection and the difficulties that the South was facing. Does that change the characteristics of the then intended formation because someone like Saad Haddad was the point man? Then, the same position can be taken or argument made about Iranian sponsored and built H.A. militia. Who runs H.A.? You speak from both sides of your mouth. Does it really matter that the Shiites "initially" embraced the Israelis because they saw a benefit? Indeed, the PLO was a huge problem and still is. And at the same time, you have the audacity to call H.A. a Lebanese "Resistance"? It also sounds like you denounce sectarianism when it suits you.