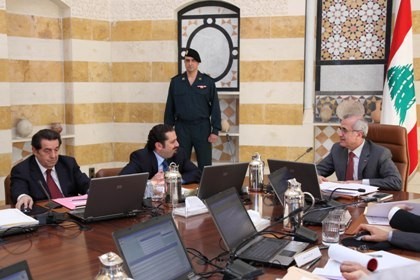 Prime Minister Saad Hariri denied on Thursday that he received a phone call from U.S. Assistant Secretary of State for Near Eastern Affairs Jeffrey Feltman during Wednesday's Cabinet session.

Hariri's Press Office stressed in a statement that this information is fabricated, incorrect, and baseless.

Al-Binaa newspaper had reported that Feltman had telephoned Hariri during Cabinet's session.

As Safir also mentioned on Thursday that Hariri had referred, during the same Cabinet meeting, to "the accusations against the fundamentalists and salafis in the assassination, which imply accusing Saudi Arabia."

The Press Office stated that the quote attributed to the prime minister was distorted.

It clarified that Hariri, in the framework of discussing the many accusations launched, said that some people accused the Kingdom of Saudi Arabia of the assassination of former Prime Minister Rafik Hariri, so will they be referred to the judicial council.

"Hariri did not in any way mention fundamentalists or salafis," the statement said.