Tripoli Teacher Asks Students to Beat Classmate to 'Discipline Him' 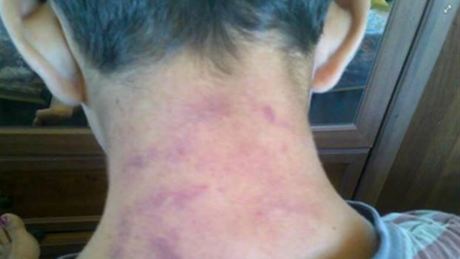 A teacher in the northern city of Tripoli has beaten up a student in a brutal way with the aim of “disciplining” him, a media report said on Tuesday.

“The teacher A. Kh. of the state-run Disciplinary School in Tripoli's el-Mina has asked students to brutally beat up their classmate Elie Kh,” LBCI television reported.

The student was “slapped on the neck with the aim of disciplining,” LBCI added.

Such retards in schools or on naharnet ➚

I do hope this arrow is for the roaring dog, cat, whatever he is.

patriotic this is not sectarian or religious based to say where it could or could not happen. it could happen anywhere and the ministry of education should control that. dont forget we are living in a country where the majority of the population are suffering and can explode on one another in such an indecent way due to psychological illness which is caused by the insecurity poverty and exhaustion

Why are you saying this?
Can you also let us know where it might happen if it will and why ?

Makes me ashamed to be a Northerner. It's too sad to see how Tripoli has deteriorated.

boy, when I used to be in school, I would have loved to have the privilege to beat some of the students in my class, even better with the teachers blessing. lol. At least school would have been a little more exciting. lol

glad he didn't ask them to rape him in the name of sex-jihad.
The teacher must be taught a good lesson.

I read the name 'elie',and it wasn't a muslim vs Christian comment as is, it was intended to Tripoli as a whole town of chaos and mayhem where u go unpunished for any crime! Amazingly I still cant understand how u found all these religious meanings in a line and a half I wrote.

From this report and the comments received so far it does not sound as though there is any respect for human rights or that there is any control and consequences for these acts of violence. What sort of society are the
Lebanese trying to create.