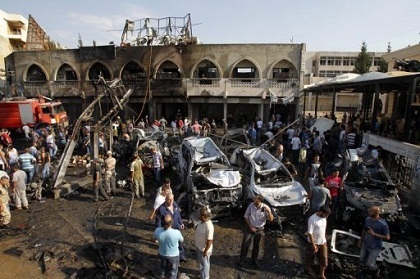 Several members of the Arab Democratic Party are behind the twin bombings in the northern city of Tripoli in August, reported al-Mustaqbal daily on Sunday.

Informed sources told the daily that seven members of the party carried out the attack that targeted al-Salam and Taqwa Mosques on August 23.

The sources said that Merhi drove a booby-trapped car to the mosque before detonating it.

They stressed however that the cleric was not involved in the execution of the attacks because it sought sides that had prior experience in carrying out such operations.

Syrian intelligence provided the booby-trapped cars and an arrested suspect Hassan Jaafar allowed their safe passage through the Lebanese city of Hermel to the town of al-Qobeiyyat in the northern region of Akkar.

The seven-member Arab Democratic Party group soon received the cars and took them to the Tripoli neighborhood of Jabal Mohsen, a stronghold of the party, on August 21.

Later on Sunday, Arab Democratic Party media official Abdul Latif Saleh told LBCI television: “The judiciary did not summon Youssef Diab and we will turn him in if he is.”

“We will turn in any culprit to the state because we abide by the law,” he stressed.

Sources told LBCI: "Hayan Haidar formed a five-member group in Jabal Mohsen, which included Diab and Merhi, in order to carry out the Tripoli bombings in cooperation with Syrian intelligence."

On Friday, armed clashes broke out in Tripoli's areas of Bab al-Tabbaneh, Jabal Mohsen and Syria Street over Diab's arrest, wounding an army soldier and a young man identified as S.M.

Forty-five people were killed and over 800 wounded in the twin Tripoli bombings.

On Saturday, State Commissioner to the Military Court Judge Saqr Saqr ordered the arrest of several suspects over their alleged involvement in the bombings.

Saqr charged on August 30 three suspects in the twin bombings of Tripoli in addition to a Syrian army Captain and another Syrian man over the booby-trapped cars.

Head of the pro-Syria Islamic Tawhid Movement-Command Council Sheikh Hashem Minkara, Sheikh al-Gharib and informer Mustafa Houri were charged with the formation of an armed gang and undermining the authority of the state.

They were also accused of forming a terrorist network and planting explosives and booby-trapped cars.

Yes, Im sure its all out of thin air, perhaps even an Israeli conspiracy to frame the excellent syrian leadership and . State Commissioner to the Military Court Judge Saqr Saqr has ordered the arrest of several suspects, yet some people are stalling, not sure how to deal with this new reality where Bashars men are caught red-handed.

and M8ers still say that bashar does not want to destabilize lebanon? that he is no terrorist?
hezbis supposedly "defend" lebanese intersts but ally with the regime that bombs lebanon! LOL

God Bless the Islamic Secular Shia Only Resistance and Sayyed Al Moqawaleh for immediately naming the culprits in both the Dahiyeh and Tripoli blasts based on evidence he already had planned prior to the explosions. Only yesterday, the resistance liquidated the persons behind the Dahiyeh blasts and today it stands ready to assist in the investigation of the Tripoli blasts. These Sunni takfiris from Alawi Jabal Mohsen along with Hassan Jaafar( himself a Shia member of the resistance) transported the vehicles from Syria through Hermel, a traditionally Sunni Mustaqbal Stronghold where the rule of law does no exist, and finally parked the cars at the crime scene. Once again the noble resistance proves it is innocent of any and all accusations targeting it by the zionist-harriri-gaegaee alliance. The resistance adheres to the highest moral and ethical standards in dealing even with its worst enemies. Bless Sayyed Hassanallah and may the Lord give him a long healthy life and many many seeds.

The Arab Dmocratic Party should be deemed illegal same as any other terrorist organization and all it allies.

"Saqr charged on August 30 three suspects in the twin bombings of Tripoli in addition to a Syrian army Captain and another Syrian man over the booby-trapped cars."

how about FACTS southern? see your syrian friends are behind this, not an invention from mustaqbal....

It is good to arrest all terrorists in lebanon, including those allied with Syria. Good job.

Go into Jabal Mohsen and drive all Assad lovers into the Alawite part of Syria.
Then go into Bab Altabaneh and deport all Takfiri lovers to KSA
Finally go into Dahye and ship all Iran lovers to Iran
Chechneya. Lebanon is not breeding grounds for foreign ideologies.

so you want the iranian/syrian sellouts to remain, since you seemed to have singled them out as being 'heroes'

starting wars with countries is treated as treason in civilized countries--what is it you hizb iran people call it again?

Samiam....resisting Israeli aggression who are holding kidnapped Lebanese and are occupying Lebanese territory is not treason. You have to be an Israeli collaborator or even worse...an Israeli

then those supporting baathist syria are traitors as they do all you mentionned!!! they support a regime that kidnapped lebanese, are aggressing lebanon and took some of lebanese lands (you know some border lands and refuse to map the borderlines for that purpose?) ....

or the definition of a traitor is double standard too? LOL

What, it does not suite you guys to blame Israel? Arab Democratic Party. What! Please no. Stick to your senseless killings in the name of Allah ou Akbar and do not involve Democracy in your murders. This other guy above, RFT, keeps referring to "Islamic Secular Shia Only Resistance". Really, how could Islam, a religious organization, also be secular? Yaaneh not only ridiculous but embarrassing, sad, pathetic, and the list goes on. take your b.s., leave Lebanon and go to Syria, Iran or Saudi Arabia.

"Organized religion also known as institutional religion, is religion as a social institution, in which belief systems and rituals are systematically arranged and formally established. Organized religion is typically characterized by an official doctrine (or dogma), a hierarchical or bureaucratic leadership structure, and a codification of rules and practices. The term organized religion is frequently used in the mass media to refer to the world's largest religious groups, ie Christianity, Islam, etc. especially those known by name internationally, and it also refers to organizations to which one can legally or officially affiliate oneself with or not.

As to RFT, his above post does not seem sarcastic. If it is otherwise, sarcasm does not belong in arenas or market places where meaningful ideas are exchanged. You fool, your week attempt to ridicule my comment and the intended insult is outweighed by your pathetic attempt.

Southern: OK, I get it. This guy RFT is being facetious. Nevertheless, I can't say I support his ideologies since it is neither clear to me what they are, nor he is important enough to give him the platform. Lebanon has been in this deadly turmoil because the elite ruling parties have been clinging to power by creating, selling and prolonging division and hatred towards one another for their own and their masters' interests. People like me neither support the M-8 nor M-14 political alliances. May be I'll rely on my M-16. No personal attack intended.

so if alakhbar reported it, it would have been gospel.

ultrahabib the ultraidiot :" Saqr charged on August 30 three suspects in the twin bombings of Tripoli in addition to a Syrian army Captain and another Syrian man over the booby-trapped cars."

has mustaqbal invented this too? LOL...we know that you cannot justify that your beloved syrian regime acts like elqaeda....it makes you bug! poor thing

waw he charged him huh? what were lawyers and courts and stuff for again? you should send your cv to the stl, they're like your style LOL

Let us not pay attention to what Al Mustaqbal or what Al MANAR says...

HA must denounce those accused by the Lebanese government who are allegedly involved in bombings or attempted bombings in civilian neighborhoods unless they have very good reasons why they think they are innocent.