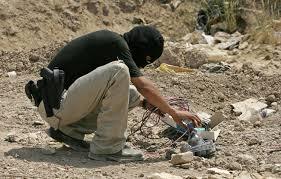 The General Security arrested a Palestinian national on charges of belonging to a terrorist network, it announced in a statement on Monday.

It said that W.N. was responsible for forging identification papers, with high level of proficiency, for terrorists.

He was also in charge of designing and manufacturing electronic devises used in bomb timers.

The suspect was charged with firing rockets and taking part in activities that violate the state's internal and external security.

The General Security also charged him with sectarian incitement.

His case has been referred to State Commissioner to the Military Court Judge Saqr Saqr.

Al-Akhbar newspaper had reported on Saturday that the General Security had arrested a man who forges IDs and is close to an al-Qaida terrorist who resides in the Palestinian refugee camp of Ain el-Hilweh in southern Lebanon.

The daily identified the suspect with his initials as W.N., saying the agency arrested him last week after monitoring his activities for weeks.

They confiscated a forged ID with him, it said. The newspaper described him as the most professional identity theft suspect in Lebanon.

"The General Security also charged him with sectarian incitement."
They should also charge flamethrower and mowaten and a few others including aoun and nasrallah.

You're mentioning the Sous-Fifres and their employers! I hope they aren't living the dolce vita and are saving some €/$ because theyre going to be out of work soon.

lol popeye, you should be charged for shameless lying.

Why do we still keep palestinians in our country while all they do is preparing terrorist acts? We should deport them en masse to KSA. Instead of KSA hiring indians, they could have arab labor. The least of what KSA can do for their Umma.

Oh, these pesky Palestinians again. They're such nice bunch.