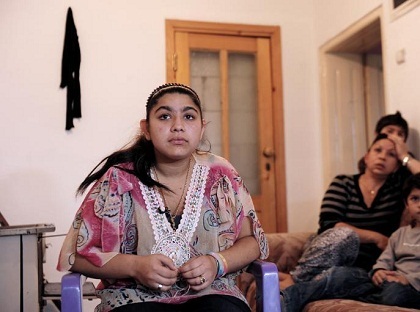 Thousands of high school students in Paris and other parts of France rose up Thursday in anger at the deportation of foreign pupils, after the high-profile eviction of a 15-year-old Roma girl.

Leonarda Dibrani was detained during a school trip earlier this month and deported to Kosovo with her parents and siblings, in a case that has raised questions over France's immigration policies, shattered the unity of the ruling Socialist party and landed France's popular Interior Minister Manuel Valls in hot water.

Critics have lashed out at the "inhumane" way the French-speaking teenager -- whose family had lived illegally in the country for four years -- was treated, pointing to the fact she was forced to get off a bus full of classmates in the midst of a school outing.

On Thursday, several thousand students marched through the streets of the French capital, after having blocked the entrance to several schools and disrupted the smooth running of other establishments.

Police put the total number of young protesters at 2,500, while the FIDL high school union said there were around 7,000.

They protested the eviction of both Dibrani and Khatchik Kachatryan, a 19-year-old Paris student who was also deported on Saturday to Armenia.

"Bring back Khatchik and Leonarda, they belong here," the marching pupils chanted, holding up signs calling for Valls to resign or urging solidarity.

The protest movement also spread to other parts of the country. In the southern town of Mende, around 100 students demonstrated under the slogan "Leonarda isn't going to class, nor are we."

Valls has launched an investigation into the deportation of Dibrani on October 9 in the eastern town of Levier, which only came to light Wednesday when an NGO highlighted the incident.

In accordance with international law, asylum seekers in France cannot be deported while their case is being examined by authorities, a process that can take years.

In the Dibrani family's case, all their formal demands to stay had been denied, and they had finally been told to leave.

The exact circumstances in which the girl was taken off the school bus remain unclear but both the Interior Ministry's version and the account of a teacher agree that her arrest did not take place in view of other pupils.

Some opposition lawmakers have backed authorities who carried out the deportation, warning that reversing the eviction -- as is demanded by students and some politicians -- would send out a damaging message that illegal immigrants are welcome in France.

But several members of the ruling Socialist party have lashed out at the government -- and Valls in particular -- for what they see as right-wing immigration policies that do not sit well with those on the left.

President Francois Hollande, whose own dismal popularity ratings sharply contrast with those of his popular interior minister, has so far not commented on the controversy.

Valls, who was born in Barcelona and only took French nationality when he was 20, is a divisive figure within his party and is no stranger to controversy.

Last month, he caused an outcry by saying most of the 20,000 Roma in France had no intention of integrating and should be sent back to their countries of origin.

He has however maintained he is well and truly left-wing and backs a "policy of integration" of foreigners in France.

The country's immigration policy "must be firm and respectful of the law and people at the same time," Valls said on Radio Caraibes International, on an official trip to the French West Indies.

For her part, Dibrani has spoken out in multiple media interviews from Mitrovica city in Kosovo, where her family has now settled, asking to come back to France to continue her schooling.

Her father Resat has also come under the spotlight, with several people who had contact with the family in France alleging he had at one stage beaten his daughters.

Gerard Guinot, spokesman for a local support committee for illegal immigrants, said the father got into trouble with authorities over the alleged violence, which had since stopped.

Last year, 36,822 immigrants were deported from France, a nearly 12 percent rise from 2011 that the Socialist government attributes to a steep rise at the beginning of the year when former president Nicolas Sarkozy was still in power.