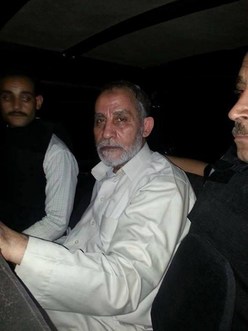 Badie and his two deputies, Khairat al-Shater and Rashad al-Bayoumi, face charges related to the deaths of protesters who stormed the Brotherhood's Cairo headquarters on June 30.

"The judges are retiring from this case for reasons of conscience and the accused must remain in detention," head judge Mohammed Fahmy al-Qarmuty told the court at the start of the session, without elaborating.

It was not immediately clear what prompted the judges to step down and it is expected that new judges will be appointed to hear the case.

Defense lawyer Mohammed Damaty insisted "there is no evidence at all in the case".

He told Agence France Presse that the authorities wanted to keep the accused behind bars on a preventative basis "because they know very well that the proceedings are political".

The judges' decision to step down will "prolong the process," he added.

A total of 32 other defendants are being prosecuted along with Badie, Shater and Bayoumi. None of the 35 were in the court on Tuesday, when the second session of their trial began.

An official told AFP that the defendants were not brought to the court for security reasons.

Badie, Shater and Bayoumi face charges of inciting the murders of nine protesters on June 30. If found guilty, they face the death penalty.

Three other accused Islamists also face murder charges while 29 are charged with participating in violence.

"I just want to see Badie and Shater hanged. I will fight for my son's rights," said Setohy Abdel Rahman, father of a protester killed in June 30 clashes, after the judges announced their decision.

Millions of protesters on June 30 called for the ouster of Morsi, accusing him of working for the sole benefit of the Brotherhood, ruining an already dilapidated economy and monopolizing power following the 2011 overthrow of longtime ruler Hosni Mubarak.

His supporters deny such allegations and point to the Muslim Brotherhood's victories in a series of polls held after Mubarak's overthrow.

The army on July 3 ousted Morsi after mass protests against his one-year rule.

Tuesday's developments in a downtown Cairo court came less than a week before the November 4 start of Morsi's trial.

Morsi is to be tried with 14 others for "incitement to murder" in connection with deadly clashes between his supporters and opponents outside the presidential palace in December 2012.

On Monday, the Anti-Coup Alliance supporting him said the Islamist had rejected the authority of the court that is due to try him.

"No lawyers will be defending president Mohammed Morsi, neither Egyptians nor foreigners, because the president does not recognize the trial or any action and processes that result from the coup," the alliance, led by the Muslim Brotherhood, said in a statement.

The group said a team of Egyptian lawyers would be attending the trial with Morsi, but only "to observe proceedings, not to defend him".

The alliance has called for mass protests on the day of the trial, raising fears of further violence in the deeply polarized country.

More than 1,000 people have been killed since Morsi's ouster -- mainly his supporters -- and the authorities have arrested some 2,000 Islamists, including most of the Muslim Brotherhood's leadership.

Morsi himself has been held incommunicado in military custody since his ouster.

His ouster has not deterred supporters from organizing anti-military demonstrations, which are now largely being held in universities.

Their demonstrations have often deteriorated into deadly street fights pitting them against opponents and security forces.

The next hearing in their trial will be on November 12, they said.

didnt they say WHY they withdrew?

Long live the good and "awake" people of Egypt.