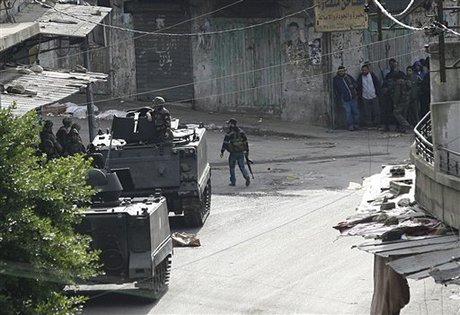 Sporadic sniper gunshots returned to Tripoli on Wednesday evening and tensions surged after gunmen shot and wounded four Jabal Mohsen residents in the city despite an army security plan that had managed to end seven days of clashes on Monday.

“Mohammed Abdul Razzaq Abdullah, Nasser Mahfouz and Bilal Ali Mohsen were shot and wounded in the legs at the al-Mallouleh roundabout as they were returning from their workplaces,” state-run National News Agency said. LBCI television said the three were on their way back from Beirut.

“They were rushed to hospital for treatment and the relevant authorities have launched a probe into the incident,” NNA added.

A fourth Jabal Mohsen resident was shot and wounded in al-Zahriyeh area later on Wednesday, Voice of Lebanon radio (100.5) reported, identifying the man as Ali Hamad.

“The army closed al-Shamal road that leads to Jabal Mohsen after some residents tried to attack some passing cars in retaliation to the attack on the three young men and tensions are high in the area,” the radio station reported.

For its part, Voice of Lebanon radio (93.3) said “sporadic sniper gunfire has returned to Tripoli's Syria Street,” which separates the rival neighborhoods of Bab al-Tabbaneh and Jabal Mohsen. It later said that a hand grenade exploded on Syria Street.

And according to VDL (100.5), the army intensified its patrols after sniper gunshots targeted Syria Street and al-Hamwi Street.

On Sunday, the army deployed in Jabal Mohsen as part of a security plan to put an end to seven days of deadly clashes in the northern city. Three soldiers were wounded on Monday as army troops deployed in Bab al-Tabbaneh.

At least 14 people were killed and more than 80 wounded in a week of clashes between the two rival neighborhoods. The fighting broke out on October 21 as celebratory gunfire erupted in Jabal Mohsen over Syrian President Bashar Assad’s appearance on al-Mayadeen television for an interview.

The neighborhoods of Bab al-Tabbaneh and Jabal Mohsen have been for years witnessing deadly gunbattles, but skirmishes began to flare with increasing intensity after the Syrian uprising began in March 2011.

It will take many weeks if not months for the situation in Tripoli to calm down. Hopefully real progress is made at the Geneva II talks.

You are 100% correct that the patrons of this violence must also be targeted for charges of insurrection and murder ... no political cover.

The patrons of this violence are Eid and crew for carrying out your beloved freedom loving fighter Assad. Start arresting.

FT you are the last to use the words one-sided on anybody.. I have always said that the disarmament of ALL groups including HA is the only hope for Lebanon.. there are patrons on all sides for sure ya genius patron inta.. I am talking about the latest flare up and what caused it.. read below.
and if I told you once I told you a million times.. as long as a SINGLE entity that is not the state is armed all others have the RIGHT to arm as well.. so pick .. either no arms for everyone or arms for everyone.

sure azrak, M8ers only want all the others to disarm but the one that protect them aka hezbollah! LOL!!!
and they pretend to be "patriotic" LOL

There are patrons of this violence on both sides, all need to be arrested and charged and their assets confiscated and held for victim compensation.

If you had read the article you would have noticed that this time all the violence was directed at Jabal Mohsen ... that couldn't have been Eid now could it?

The guy orchestrated one of the largest bombings in tripoli against a religious site on the behest of a criminal you, and southern think is the only salvation for his country. This episode was directed at jabal mohsen. But the series began with them. Broaden your view.

And here we go again..

I am sure it is because they are very patriotic and would defend the Lebanese army against any aggression form the likes of Assad and his regime. They are patriotic to the bones (Lubnan awalan wa akheeran for them). They wear the Cedar tree on their head and in their hearts.

lebanon no more exists, hezbollah made sure of that....