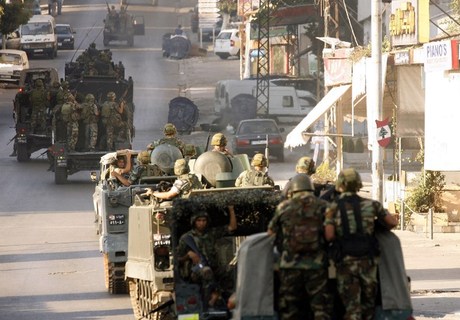 Ahmed Qiblawi, one of Sheikh Ahmed al-Asir's fugitive supporters, was arrested Wednesday as he tried to cross Sidon's al-Awali checkpoint while disguised as a niqab-wearing woman.

“An Internal Security Forces patrol chased Ahmed Qiblawi, one of Ahmed al-Asir's loyalists, while he was disguised as a woman and managed to capture him at al-Awali checkpoint at the northern entrance of the city of Sidon,” state-run National News Agency said.

“Army intelligence agents then took him to the Mohammed Zgheib Barracks in Sidon,” NNA added.

According to several media reports, Qiblawi was sporting an Islamic full-face veil, or niqab.

The whereabouts of Asir, his close aide Fadel Shaker and many of their group remain unknown after the army stormed the Islamist cleric's headquarters on June 24.

Eighteen soldiers were killed and 20 others were wounded in fierce clashes sparked by an attack by Asir loyalists on an army checkpoint in the Sidon suburb of Abra. Twenty of Asir's gunmen were also killed in the fighting.

The fighting was among the worst in Lebanon since the outbreak of the conflict in neighboring Syria in 2011.

This surely must strengthen the world wide demand on the banning of the niqab.
Just think, if 1 was captured, just how many managed to get through.

Mr. Assir and his team of terrorist should have been arrested months ago. It would have saved the lives of many of the beloved Lebanese Army soldiers.

Hahaha! Asir did the same when he fled S

how told u ? the same people that attacked the mosque, tortured people arrested and were shouting "HAYDAR" ?

how foolish, a tall guy dressed in black ninja outfit.... something was wrong. He should ask his cousin Nusra-lla 4 advice about hiding.

By the way, excellent point Prime, Nasrallah's the dairy queen of hiding in a hole, let's here him say "come at em bro" :P

Thank you Tony for pointing out that fact, and even if he/she/whatever was dressed like Hezbollah? They'd be denying it like usual...total taqiya nonsense...like that's any better...divine victory...lol.

and pro-hezbollah is any better? same backwards nonsense..just saying.

Always funny to hear a LF speak about braveness and courage...