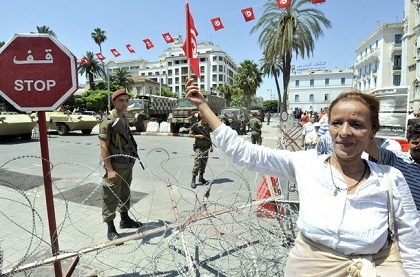 Tunisia's ruling Islamist party Ennahda and the opposition were deadlocked in talks Saturday to choose a new prime minister tasked with steering the country out of a months-long political crisis.

Tensions have gripped the country since the 2011 uprising that toppled veteran dictator Zine El Abidine Ben Ali and were exacerbated with the murder this year of two opposition politicians by suspected radical Islamists.

Ennahda, a moderate Islamist party whose resignation has been demanded by the opposition, has pledged to step down and allow the creation of a government of independents as part of a roadmap.

After months of stalling, the Islamist-led government opened talks with the opposition on October 25 to form the new government, agree on a much-delayed constitution and prepare for elections.

The roadmap to resolve the crisis was drafted by mediators including the powerful UGTT trade union, which announced the latest setback.

It said that a meeting Friday of party leaders to chose a new prime minister became bogged down over who should be appointed to the post from among four candidates.

The delegates agreed to set up a new committee tasked with overcoming the stalemate, the UGTT said in a statement overnight.

The committee is to meet on Saturday at an undisclosed time and would include the head of the National Constituent Assembly, Mustapha Ben Jaafar, Ennahda chief Rached Ghannouchi, and five opposition figures.

Both are well respected and have served under the late Habib Bourguiba, who led the fight for Tunisia's independence from its French colonial masters and served as its first president (1957-1987).

Press reports said Ennahda and its secular coalition partner were backing Mestiri for the premiership, while the opposition was in favor of Ennaceur.

Mestiri held several key portfolios in successive governments under Bourguiba -- finance, justice, defense and interior -- while Ennaceur is an expert on social affairs.

Whoever is tapped for the position will have two weeks to form a government of independents to prepare for elections.

Larayedh has pledged to step down so long as the timetable is respected. The Assembly has until the end of November to draw up a new constitution and an electoral law.

The timetable for the negotiations has been delayed because the nomination of an electoral committee due Saturday has been postponed.

A simmering political crisis that gripped Tunisia since the 2011 uprising erupted in July when opposition MP Mohamed Brahmi was gunned down outside his house, six months after the murder of another opposition politician.

Both killings were blamed on suspected jihadists, suppressed under the regime of Ben Ali and now accused for a wave of violence that has hit the country since his ouster.

Militant Islamists have been blamed for the unrest, including a deadly attack last year on the U.S. embassy in Tunis and ambushes targeting security forces in the rugged border region with Algeria.

On Wednesday a suicide bomber blew himself up at a beach in the popular tourist resort of Sousse, and minutes later security forces foiled another attack in nearby Monastir.

Tunisia has also been reeling from economic hardship -- a driving force behind the 2011 uprising -- with inflation running at more than six percent, a weak dinar and steep budget deficit of around 7.4 percent of gross domestic product.

You rarely hear of militant moderation or secularism, just like you never hear of peaceful extremism and sectarianism

They, too, must be demanding the withdrawal of Hizbullah from Syria. Sweet dreams, babies. They, too, shall wake up to bigger nightmares. takbir