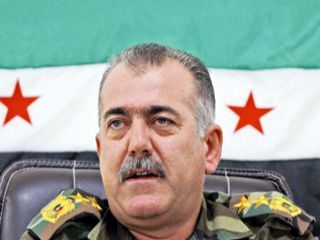 The rebel leader who led a massive July 2012 assault on Aleppo resigned Sunday, accusing both Syria "warlords" and the international community of "conspiring" against the people.

"Because of some people's refusal to heed calls for unity... I announce my resignation from the leadership of the Revolutionary Military Council in Aleppo," Colonel Abdel Jabbar al-Okaidi said in a video statement.

The July 2012 assault saw rebels seize large swathes of the city before a bloody stalemate set in.

Activists and rebels have long blamed internal disputes and the international community's failure to supply the opposition with advanced weaponry for the sustained stalemate, which has resulted in the destruction of much of the city.

In his statement, Okaidi pointed to the rebel loss on Friday of Sfeira, southeast of the city, and said the "blessed revolution" against President Bashar Assad "has torn off the last mask on the face of the international community", which is "conspiring against this people and against this revolution."

Okaidi also lashed out at the exiled opposition, "who represent no one but yourselves.

"You have turned your backs on (Syria) and you have detached yourselves from it completely," he said.

In the video, which was shared widely among Syrian activists, Okaidi also criticized some rebel leaders on the ground, whom he referred to as "warlords."

"Stop... racing each other for power and for your kingdoms... Go back to how you were" at the start of the revolt, he said.

Speaking to Agence France Presse via the Internet, activist Mohammad Wissam said that the fall of Sfeira has given rise to "fears for Aleppo city."

Sfeira's fall "means that the road to Aleppo from the east is open," he said.

The activist also described Okaidi as "one of the most important personalities of Aleppo."

Okaidi had earlier written on his Facebook page that "Sfeira has not fallen because of a lack of ammunition. God is our witness that we put all the (rebel) Council's capacity at the disposal of the Sfeira operations room...

"The Sfeira front needed men to fight, but the (rebel) Free Syrian Army and other battalions failed."

Okaidi defected from the loyalist army in May 2012 to join the rebellion against President Bashar Assad.

The 31-month revolt, triggered by a military crackdown on Arab Spring-inspired protests, has killed an estimated 120,000 people and displaced millions from their homes.