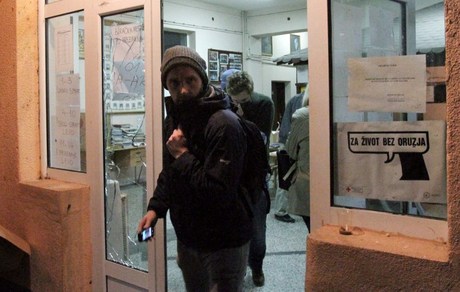 NATO head Anders Fogh Rasmussen on Monday "strongly condemned" the violence that marred key weekend polls in Kosovo and said the military alliance was committed to maintaining its presence there.

Rasmussen said NATO troops in Kosovo stepped in at the request of the European Union on Sunday, when Serb extremists stormed a polling station in Kosovska Mitrovica, the main Serb-populated town in the ethnically divided territory.

"Violence should not be allowed to derail the progress so far" between Serbia and Kosovo, he said, referring to EU-brokered talks which led to a normalization accord in April.

Asked about NATO's plan to reduce numbers of its KFOR force in Kosovo, Rasmussen said there was "no intention to reduce the KFOR presence for the time being."

The plan has "been put on hold as we consider it important to make our contribution" to the Serbia-Kosovo dialogue, he said, adding: "Recent incidents illustrate the importance of that task."

NATO launched a bombing campaign against late Serbian strongman Slobodan Milosevic's forces to end the 1989-1990 conflict in Kosovo, and then set up KFOR, now reduced to some 5,000 troops, to ensure security.

Sunday's vote was the first Serbia has backed since Albanian majority Kosovo unilaterally proclaimed independence from Belgrade in 2008.

Some 120,000 ethnic Serbs live in Kosovo, whose 1.8 million population is mostly Albanian. Some 40,000 of them live in the north, where they make up the majority and enjoy control over some public institutions.

The EU deal gave Serbia the green light to begin membership talks with Brussels and so ensuring the accord works is vital for Belgrade.

For Kosovo, a free and fair vote with a significant Serb turnout would be a positive step in its own push for closer EU ties.

Kosovo's independence is recognized by most EU states.