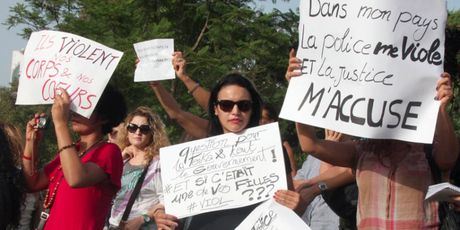 A Tunisian court Monday adjourned the trial of three policeman in the case of a young woman raped last year, which caused uproar when the prosecution tried to blame the victim.

The woman, known by the pseudonym Meriem Ben Mohamed, burst out sobbing when the policemen entered the courtroom.

"It would have been better if they'd killed me," she told the judge before he adjourned the trial to December 9 because her psychiatric evaluation had not been completed.

"They destroyed me and my whole family. I don't want to get married or have children any more. Every day, the images run through my head again," Mohamed later told Agence France Presse.

The three officers are in custody awaiting trial, two of them on rape charges and the third accused of extorting money from the woman's boyfriend.

The police say they found the couple having sex in their car in a Tunis suburb in September 2012.

Two of them then took the woman to a police car, where they raped her in turn, according to a judicial source, while a third allegedly tried to extort money from her fiance at a bank cashpoint.

The public prosecution tried unsuccessfully to bring indecency charges against the couple, sparking a storm of protest and a campaign of support for the young woman.

But on Monday, the woman said she felt abandoned, as she was forced to wait hours before a lawyer eventually came to represent her.

During her legal team's absence, the lawyer defending the policemen asked Mohamed "Why don't you forgive them? Even God forgives, why not you?" an AFP correspondent said.

She has since published a book in France giving her account of what happened, entitled "Guilty of being raped".

The Islamist-led government was sharply criticized for its handling of the case, with the opposition accusing the ruling Ennahda party of trying to impose Islamic values on society, including by undermining the rights of women.