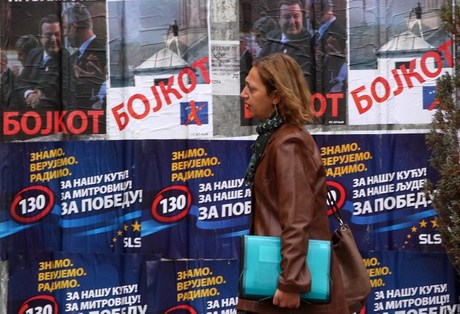 Kosovo election officials said Wednesday they had decided to annul a vote in a Serb-populated town that was violently disrupted by hardliners last weekend, and ordered a re-run.

"The date for a repeat vote in these three polling centers will be determined later," the commission said in a statement.

In a blow to Serbia, which hoped a peaceful election Sunday would accelerate its EU membership path, voting was disrupted in Serb parts of Kosovska Mitrovica after Serb extremists stormed a polling station and destroyed ballot boxes.

Ashton has condemned the violence that marred the election and called for an investigation "without delay".

The meeting is set to discuss the the next steps in the electoral process and implementation of the landmark April deal between Pristina and Belgrade on normalization of relations, Ashton's spokeswoman Maja Kocijancic said.

Sunday's vote, agreed upon in the EU-brokered accord, was the first Serbia has backed since Kosovo unilaterally proclaimed independence from Belgrade in 2008.

Some 120,000 ethnic Serbs live in Kosovo, whose 1.8 million population is mostly Albanian. Some 40,000 of them live in the north, where they make up the majority and enjoy control over some public institutions.

The participation of minority Serbs in the north, who have rejected Pristina's authority since 2008, was crucial for both Serbia and Kosovo to accelerate their respective EU membership bids.

Serbia, although still refusing to recognize Kosovo's independence, urged the minority Serb community in the breakaway province to vote and have their say in Pristina-run institutions.

Kosovo's independence is recognized by more than 100 states, including the United States and 23 of 28 EU member countries.