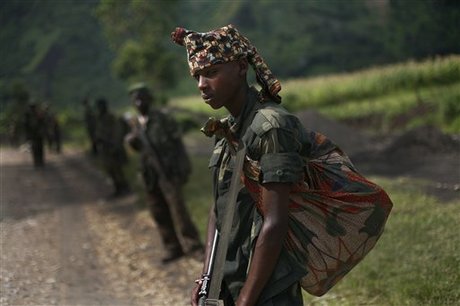 The government of the Democratic Republic of Congo and the defeated M23 rebels will Monday sign a peace deal, Uganda said, adding that it will not send the fleeing insurgents back across the border.

The M23 on Tuesday ended its 18-month insurgency after a resounding defeat at the hands of the armed forces of the Democratic Republic of Congo.

Since then the majority of its fighters have fled across the border into Uganda.

"The agreement is ready and we are expecting everybody to return Monday to sign it," Ugandan government spokesman Ofwono Opondo told Agence France Presse of the deal.

"The agreement will detail how each case will be handled. There are those that are under US and U.N. sanctions, those who want to be reintegrated in the army, and those who simply want to go home," Opondo said.

The peace talks, which started in December, had made little headway until the DRC army started to get the upper hand militarily in recent weeks.

One of the major stumbling blocks had been the fate of around 100 M23 officers who have taken part in a series of rebellions over the past 15 years and that Kinshasa did not want to see reincorporated into its army.

Opondo said that the United Nations and the African Union, which backed the peace process, would attend Monday's ceremony.

He also confirmed that the military chief of the March 23 Movement, a group formed 18 months ago, and which both Rwanda and Uganda have been accused of backing, is on Ugandan territory.

"Yes, Sultani Makenga is with us," he told AFP, refusing to reveal the rebel chief's whereabouts.

Uganda will not hand over M23 rebels who fled after being defeated, the spokesman for the army and the defence ministry said.

"They are not prisoners; they are soldiers running away from a war so we are receiving them and helping them because it is our responsibility," Colonel Paddy Ankunda told AFP, adding that Uganda had also welcomed fleeing soldiers from the DRC's national army earlier in the year.

Ugandan officers said Thursday that some 1,500 M23 insurgents had crossed over and surrendered.

"They will not be handed over to DRC," Ankunda said.

He said that fighters who refused to return home after the peace agreement would be handed over to the U.N. refugee agency, who would screen them and decide if they were eligible for refugee status.

"The government security forces screen the rebels when they cross the border and ... make sure they are not mixing with civilian refugees," Lucy Beck, a spokeswoman for the U.N. refugee agency told AFP from southwestern Uganda, where the fleeing rebels have taken refuge.

Some 8,600 civilian refugees were still at the U.N. transit center, but another 1,000 were walking or hiring trucks back to DR Congo.

"We should have far fewer refugees in the transit center by the end of the day," she said. "A lot of them come from close by and we expect a majority will return."

"UNHCR is not considering repatriation of the refugees as it is not considered safe, even without M23," Beck went on, citing the myriad of other armed groups operating in the east of the DR Congo.

She said the agency was still hosting some 20,000 civilian refugees from DR Congo who fled earlier this year and that the majority of those had fled armed groups other than the M23.

A further 95 men from the M23, all wounded, sought refuge in neighboring Rwanda, where they are receiving medical treatment, according to the local Red Cross.

Analysts have cast doubt on the figure of 1,500, saying that the entire M23 force numbered only around 1,000 men at the end of October.

They have suggested that the figure given by Uganda may include insurgents' family members.

the number given by the government of Uganda includes some of the Rwandese forces who were helping the M23 rebels! shame on them! majority of the rebels are even mixed with the civilians refugees! All those wounded in Rwanda did not flee there! they were transported long ago into Rwanda for medical attention! those fools should not be integrated! they should be demobilized and scrutinized because majority of them are not Congolese! shame on them!