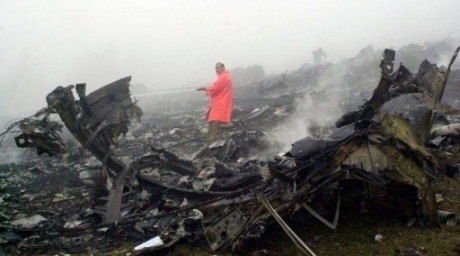 Thirteen people died when an Indonesian army helicopter carrying construction workers to build a military outpost crashed in the jungles of Borneo Saturday and burst into flames, an official said.

The helicopter was carrying eight crew, 13 construction workers and materials when it appeared to suffer engine trouble and fell to earth.

It was just the latest deadly aircraft accident in the sprawling Indonesian archipelago, which relies heavily on air transport to link its many islands but has one of Asia's poorest aviation safety records.

"There was engine trouble and the helicopter lost power," he said, adding that it "fell with a thump this morning and a fire started".

An army spokesman, Rukman Ahmad, confirmed a crash had taken place: "An Mi-17 helicopter was involved in an accident near outpost Bulan. It was carrying construction workers to build the outpost."

Eight of those who died were civilian construction workers, while five others were crew members, who were military personnel, said Sitompul.

The military had started evacuating the survivors, he added.

The area near the Malaysian border is so remote it can only be reached by helicopter, an AFP reporter on Borneo said.

Borneo is a vast, biodiverse island shared between Indonesia, Malaysia and Brunei, covered in lush jungle and home to rare animals such as orangutans.

The military spokesman Sitompul said early indications suggested that engine problems had caused the helicopter to crash although he stressed it was still unclear exactly what happened.

There have been numerous fatal crashes over the years in Indonesia and some have involved military aircraft.

In 2009, four people were killed after an Indonesian navy aircraft crashed into a swamp on Borneo.

Earlier that year, at least 101 people died when an Indonesian military transport plane carrying soldiers and their families crashed into homes and erupted in flames.