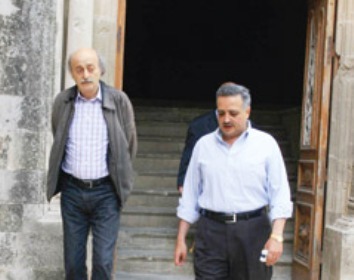 The gatherers discussed the general political situation and the latest developments in the presence of Transportation and Public Works Minister Ghazi al-Aridi.

LBC reported that Arslan’s brother-in-law Marwan Khaireddine will replace him as Minister of state.

The MP had resigned from the cabinet led by PM Najib Miqati following its formation.

Arslan had demanded that he be granted with a sovereign portfolio in the cabinet, rejecting to be tasked as a state minister.

The photo makes it look like Waliid is walking him out to the new plot of land he bought by the stadium where we saw him digging a hole earlier.

Looks like his last previous visit to Syria is bearing fruit, Syrian dogs, go to hell