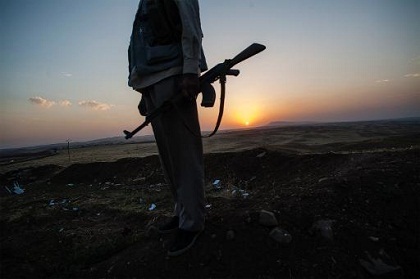 Syrian Kurds in the country's northeast announced the formation of a transitional autonomous administration on Tuesday after making key territorial gains against jihadists in recent weeks.

But several major Kurdish groups have not signed on to the declaration, which had originally been mooted in July.

The latest announcement comes amid a general strengthening of Kurdish rights in neighboring Turkey, and increasing moves towards independence by Iraq's own autonomous Kurdish region.

"Today is an important day in the history of the Kurdish people," said Shirzad Izidi, a spokesman for the People's Council of Western Kurdistan, a Syrian Kurdish group.

"What has been announced today is the beginning of implementing an interim administration in the ares of West Kurdistan," he continued, referring to the commonly used name for Syria's Kurdish areas.

The announcement was made after talks in the mostly Kurdish town of Qamishli days earlier and involves the division of Syria's Kurdish region into three areas, each with its own local assembly, as well as representatives to a regional executive body.

The administration has been tasked with preparing local and general elections, along with handling an array of political, military, security and economic issues.

But the fact that the newly formed authority lacks the backing of several key parties has raised questions over whether it will be long-lasting.

Currently, the transitional authority is formed by the powerful Kurdish Democratic Union Party (PYD) and several other smaller groupings, but not the Kurdish National Council, which includes a broad spectrum of parties.

"I think that such a rushed, one-sided move will be seen as... an obstacle to the Syrian opposition," said Nuri Brimo, a member of the KNC.

"I think the (PYD) is moving in the wrong direction by individually announcing the local administration."

Kurdish regions of northern Syria have been administered by local Kurdish councils since forces loyal to Syrian President Bashar Assad withdrew in the middle of 2012.

The redeployment was seen as a tactical move by the regime, one which freed up forces to battle rebels elsewhere, and encouraged the Kurds to avoid allying with the opposition.

More recently, Kurds have battled with jihadist groups keen to secure a wider corridor between Syria and Iraq to ensure more regular supplies and reinforcements.

Fighting between Kurdish militiamen and jihadists ostensibly battling to topple Assad has added another level of complexity to the civil war, which has claimed an estimated 120,000 lives since 2011.

Kurds represent about 15 percent of the Syrian population, and are mostly concentrated in the northern part of the country.