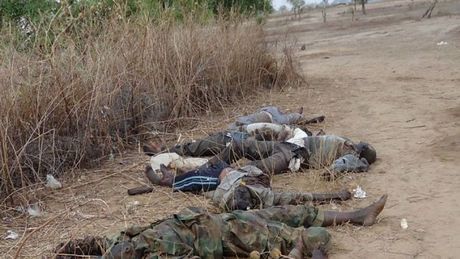 Sudanese rebels on Tuesday claimed their first major attack of the new fighting season, even as the country's defense minister vowed to crush them in coming months.

There were "many, many casualties, many dead bodies" in the afternoon ambush which destroyed three tanks near Dilling town in South Kordofan state, said Arnu Ngutulu Lodi, spokesman for the rebel Sudan People's Liberation Army-North (SPLA-N).

"As I'm speaking to you, our forces are controlling the road."

Fighting typically intensifies in the region when roads again become passable after the rainy season.

"We were monitoring them," he said, adding that a rescue convoy was also attacked.

SPLA-N fighters conducted the operation alongside the Justice and Equality Movement (JEM) from Darfur, Lodi said.

The two groups belong to the Sudan Revolutionary Front which seeks to topple the Khartoum regime and install a government more representative of the country's diversity.

"We lost three of our colleagues as martyrs."

Analysts say casualty figures from either side in the war should be treated with caution.

JEM has been supporting the SPLA-N in South Kordofan since shortly after rebellion began there two years ago, analysts say.

The claimed attacks came as Defense Minister Abdelrahim Mohammed Hussein told parliament that his forces were commencing an operation to crush the insurgents over the next few months.

"This summer will see an end to the rebellion, and after that stability will return to South Kordofan and Darfur," he said.

Sudan had long accused South Sudan of backing rebels in the north, but relations between the two countries have improved since a September summit between President Omar al-Bashir and his southern counterpart Salva Kiir.

They agreed, among other measures, to set up a demilitarized buffer zone designed to prevent cross-border rebel support.

Hussein told legislators that the rebels have 8,000 fighters in South Kordofan, alongside 1,000 from the Revolutionary Front.

Analyst reports issued early this year said there were 30,000 or more SPLA-N fighters in South Kordofan, while government forces numbered 40,000-70,000.

Nuba Reports, a website of "citizen reporters" in South Kordofan, reported on November 4 that it had observed both an increase in government air strikes and rebel troop movements during October, at the end of the rainy season.

The government and rebels are both refusing to allow U.N. workers to vaccinate children against polio in rebel zones of South Kordofan and Blue Nile, where SPLA-N is also fighting, U.N. humanitarian operations director John Ging said Monday.

A broader internationally-backed plan to get food and other aid into rebel-held areas collapsed last year despite months of talks.

As a result, 800,000 people in the war-zone have had no outside assistance for 18 months, Ging said.

In separate comments earlier this year he said people were surviving on "roots and leaves."

Battles between Arab tribal militias have killed hundreds this year.

"The tribal clashes are the biggest challenge and threat to security in Darfur, more than rebel movements," Hussein said.

Non-Arab rebels rose up 10 years ago in Darfur, seeking an end to what they viewed as Arab elites' domination of Sudan's power and wealth.

In response, government-backed Janjaweed militiamen recruited among the Arab tribes shocked the world with atrocities against non-Arab civilians.

Analysts say the cash-starved government can no longer control its former Arab tribal allies and violent competition for resources has intensified.

Hussein is wanted internationally for alleged crimes against humanity and war crimes in Darfur.