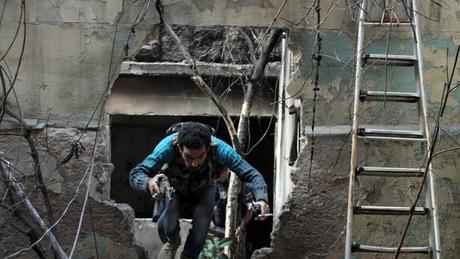 At least 160 rebel fighters and Syrian troops have been killed in two days of clashes in the Eastern Ghouta region just outside Damascus, a monitoring group said on Sunday.

The latest fighting comes against the backdrop of regime advances in Damascus province that have cut rebel supply lines to the capital and its southern districts.

The Syrian Observatory for Human Rights said the fighting began Friday when rebel forces, including jihadist fighters, launched attacks against checkpoints and military stations in five areas in the Ghouta region.

"They are trying to break the siege imposed by the army on the region," Observatory director Rami Abdel Rahman told Agence France Presse.

The group said the dead included 55 rebel fighters, including seven battalion leaders, and 41 jihadists from the al-Qaida-affiliated Islamic State of Iraq and the Levant and the Al-Nusra Front.

At least 36 Syrian regime troops were also killed, along with 20 members of a Shiite Iraqi group fighting alongside the army, and eight members of a Syrian pro-regime militia.

The Observatory said Hizbullah was also fighting alongside the Syrian army, but gave no details on casualties in its ranks.

The group, which relies on a network of activists, doctors and lawyers on the ground, also said five citizen journalists, including three who had fought alongside the rebels, were killed in the fighting.

Eastern Ghouta, a ring of suburbs besieged by the army for months, was one of the areas targeted in an August chemical attack that the U.S. and other world powers blamed on President Bashar Assad's regime.

As part of a deal to head off U.S. military strikes, Damascus has agreed to destroy its entire chemical weapons arsenal.

Syria is cooperating with the disarmament operation being carried out by international experts, who have reported that the entire chemical arsenal has been sealed, awaiting destruction.

But despite the deal, Ghouta has remained under a tight siege and subjected to continued shelling by regime troops, with activists warning of a humanitarian disaster in the rebel stronghold.

In recent weeks, the Syrian army has recaptured a string of areas south of Damascus, turning its attention to both Ghouta and the strategic Qalamoun region north of the capital.

On Tuesday, the army captured Qara, a town on Qalamoun close to the Lebanese border.

It hopes to further disrupt rebel supply lines to areas around the capital by cutting access to the Lebanese border, which food, weapons and fighters regularly cross.

The Syrian conflict, which began in March 2011, has killed more than 120,000 people and prompted millions to flee their homes.