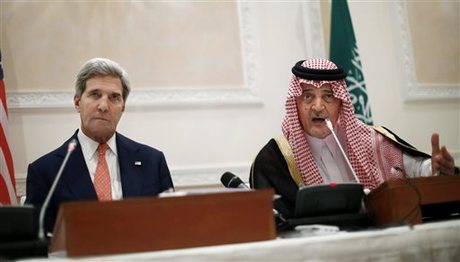 "This agreement could be a first step towards a comprehensive solution for Iran's nuclear program, if there are good intentions," the government said in a statement.

The landmark deal reached Sunday would curb parts of Iran's nuclear program in return for some relief from international sanctions.

Sunni-ruled Saudi Arabia has been locked in a decades-long rivalry with Shiite-dominated Iran.

The government said a comprehensive solution should lead to the "removal of all weapons of mass destruction, especially nuclear, from the Middle East and the Gulf".

Such a solution should be followed by "important steps" that would guarantee the right of all states in the region to use nuclear power for peaceful purposes, it added, the SPA state news agency reported.

The deal was reached following marathon talks in Geneva between Iran and the so-called P5+1 nations comprising Britain, China, France, Germany, Russia and the United States.

The West and Israel suspect Iran is pursuing a nuclear weapons capability alongside its uranium enrichment program, which Tehran insists is entirely for peaceful purposes.

Saudi newspapers were skeptical of Iran's commitment to implement the deal.

Al-Riyadh daily charged in its editorial that the agreement was aimed at getting Gulf countries "stripped naked in face of Iran's growing nuclear power, and its scary ambitions".

"This could lead to alienation between Europe and the United States (on one side) and Gulf countries (on the other)," it said.

Other Gulf monarchies welcomed the agreement.

Qatar said the deal "marks an important step on the road to peace and stability in the region," while calling for a Middle East void of nuclear weapons.

Bahrain also hailed the agreement, saying diplomatic solutions were the "best means" to guarantee stability, while Oman and Kuwait expressed hopes the agreement would ease tensions and lead to peace and stability.

Gulf monarchies have never made a secret of their concerns about Iranian regional ambitions.

Tehran is a key backer of Syrian President Bashar Assad, of the Shiite Alawite sect, in his fight against a nearly three-year insurrection backed by Gulf states.

The Islamic republic is also seen as feeding instability in Bahrain and Yemen through the Shiite communities there.

Good News! ... Looks as if the KSA is feeling the heat.

And this leaves shameless Israel all alone in the world ... again.

@Bickini : Israel is not alone, they are now Iran's partners !

You are now a Zionist loving iranian & terrorist sponsoring sheep :)

Hezbollah is officially the new US / Israeli ally in Lebanon making all of you traitors as Israel still is the national enemy.

Hezbollah can now safely drop their weapons as they no longer need to "protect our borders"...

FlameCatcher ~ "Israel is not alone, they are now Iran's partners !"

If this is what you believe there are no words for me to respond to you as this theory of yours is complete nonsense ...

true. this is good news. Iran and KSA getting along is good for lebanon.

Let's make sure that the KSA is sincere in their approval of the deal. In the meantime they continue to support Qaeda and Takfiris in Syria, around MENA, in Pakistan, the Caucasus and elsewhere.